The bitcoin halving is scheduled to occur in May 2020. Halvings happen about every four years, and each time, the amount of new bitcoin being mined is cut in half.

After this next halving, the reward for successfully mining a block will be reduced from 12.5 coins to 6.25 coins.

The “inflation rate” (percentage of new coins coming into the market) will go from 3.7% to 1.8%. That’s a big decrease in new supply.

In the past, halvings have been extremely bullish for bitcoin prices.

Interestingly, there was a pullback of around 40% to 44% before each prior halving. That’s exactly what we’re seeing now: a 44% pullback from recent highs of $13,000. 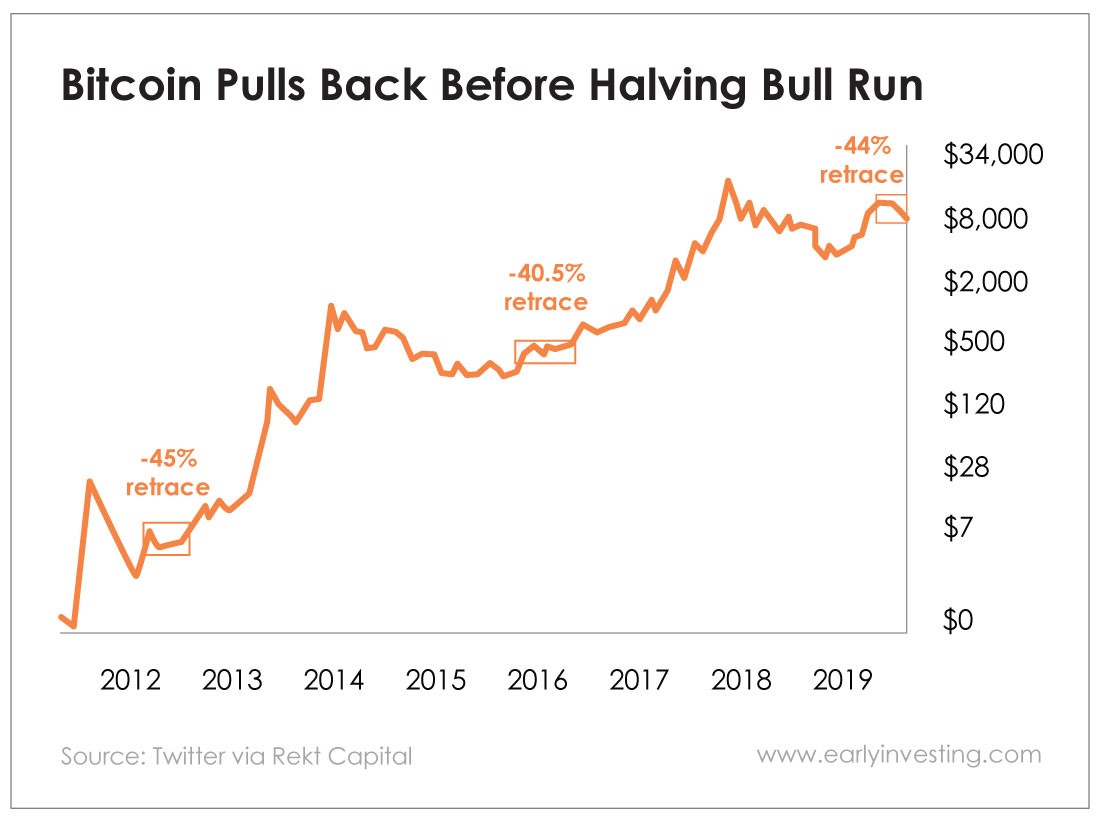 The retracements (temporary price reversals within an overarching trend) before the previous two halvings provided an amazing buying opportunity.

Will the Halving Coincide With Financial Chaos?

The halving is a serious catalyst on its own, and I think it has the potential to power bitcoin much higher.

But I get the feeling that it won’t be the only thing driving bitcoin prices higher. I think the Federal Reserve and the U.S. government are going to be “helping” as well.

The Fed will be printing larger and larger amounts of money going forward. And with its new “not quantitative easing” program, the Federal Reserve is essentially now funding U.S. deficits.

It’s buying up $60 billion in Treasury bills per month, lowering interest rates and providing $87 billion of liquidity in the overnight repo market.

In July, I wrote a piece arguing that MMT (Modern Monetary Theory), or something a lot like it, is inevitable.

Here’s why. The current annual U.S. federal deficit is $896 billion, according to the Congressional Budget Office (CBO). The national debt stands at more than $22 trillion.

This year, the U.S. will pay out more than $500 billion in interest on that debt. By 2024, it is estimated that interest costs will surpass defense/military spending. The CBO says that interest costs could surpass $1 trillion by 2028 (but I suspect it will happen even sooner).

Digest that for a second. We will soon be spending $1 trillion on the interest costs of our debt. To put that into perspective, total government revenue (from taxes) totals about $3 trillion per year.

It looks more and more like this will be the case. The political establishment seems incapable of cutting government spending as much as we need it to. So my theory is simple: The Fed will print money to pay the bills. This is essentially what’s happening now. The Fed is buying up U.S. debt that nobody else seems to want.

All of the uncertainty surrounding this brewing financial disaster should be good for bitcoin. Bitcoin was built as an alternative to the fiat system for exactly these reasons. Fiat money can be printed at will.

Bitcoin is hard money. And after the May 2020 halving, it will have a similar inflation rate to gold. I think it all adds up to a perfect storm for bitcoin prices. I would not be surprised to see $50,000 bitcoin by the end of 2020.

I think this is a unique opportunity to buy bitcoin at the beginning of a new bull market.