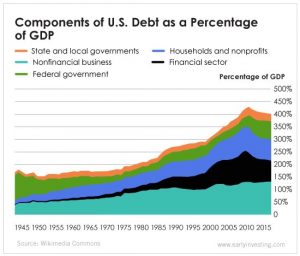 Ray Dalio founded the largest and most successful hedge fund in the world, Bridgewater Associates.

Today Bridgewater manages $160 billion and has produced returns of $49.7 billion for its investors since its inception in 1975. Thanks to his firm’s impressive performance, Dalio is now one of the 100 wealthiest people in the world.

Dalio recently answered a series of questions on Facebook, and one of his answers in particular caught my eye. The question posed to Dalio was about the growing size of U.S. debt and liabilities and the impact of rising interest rates (emphasis mine):

Question: “… It was OK to service [debt] under 0% rates, but now when rates are going up, what policy, in your view, should be a better response? Cutting deficit? Reducing spending? How do we transition from beautiful deleveraging to normalization without pushing on a string?”

Dalio’s answer: “Because the dollar size of our obligations (to service debts and meet non-debt obligations for pensions and healthcare) is large and will grow at a rate that is faster than the incomes to meet them, I expect borrowing and printing money will both grow, which will weaken the dollar and eventually diminish its role as a reserve currency. Said differently, the soundness of our finances is weak.”

Notice that he didn’t really answer the question. The user asked what we should do about this huge problem. And Dalio answered with what the government is going to do – print more money and take on more debt, which will lead to the eventual fall of the dollar as the world’s reserve currency.

This is the elephant in the room that nobody wants to talk about. You can’t keep borrowing, spending and promising beyond your means forever. Eventually, it catches up. 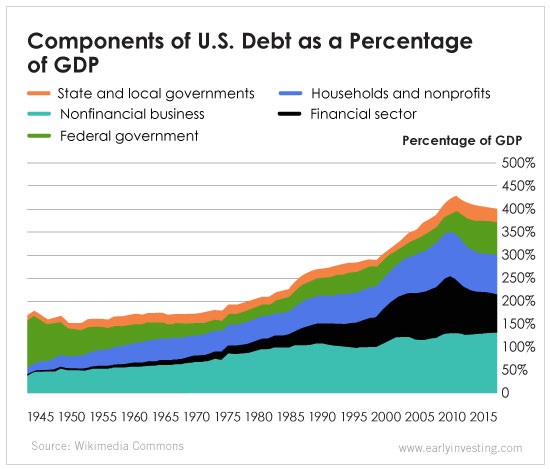 This chart shows U.S. total debt as a percentage of GDP (gross domestic product). What this tells us is that over time, each dollar of debt has produced less economic growth.

Unfortunately, this chart only goes to 2015. An updated chart would be a lot uglier.

Amazingly, there appears to be no concern over these issues in Washington. Politicians on both sides of the aisle continue to support ridiculously large spending bills packed with special interest giveaways and other waste.

Will this lax attitude change anytime soon? I used to think so. But apparently we’re going to continue barreling full speed toward the mother of all financial crises.

I don’t claim to know when these issues will come to a head. But in my view, a substantial dollar devaluation is inevitable within the next 10 to 15 years.

So while the Fed is talking a nice game about tightening and “normalizing” interest rates, I view this part of the cycle as simply setting up for the next round of quantitative easing. It’s tightening for now, but before too long it’ll loosen up credit again. That means more debt, more dollars and – eventually – less demand for U.S. Treasurys and currency on world markets.

The dollar has had a good run, but it can’t last forever. In fact, I don’t think we can survive the dollar being the world’s reserve currency much longer. Because of the greenback’s incredible strength over past decades, we’ve lost the bulk of our manufacturing sector. A strong dollar makes it extremely difficult for companies here to compete with cheaper overseas manufacturers.

So the silver lining is that whenever the dollar does devalue substantially, it will finally be possible to rebuild an export economy in the U.S.

Throughout history, borrowing and printing fiat currency has been tried over and over again. Eventually, it always fails and people remember why scarcity is such an important quality for money.

The next time this happens, I expect cryptocurrency to emerge as our new form of money. Gold may well have a role to play too, but in this digital world, the ability to transfer crypto worldwide for pennies, without middlemen, may be the deciding factor.

The post Ray Dalio: “Soundness of Our Finances Is Weak” appeared first on Early Investing.

Founders Who Rewrote the Rules

News Fix: The Fed – and the Feds – Are Confused

Bitcoin Group SE Reports Half-Year Profit Surges 300% to $3.86 Million Ether is ‘Property’ And ‘Should Be Protected By Law,’ Says Chinese ...
Scroll to top