The number of cryptocurrency funds has been decreasing over the last year, as per a recent report. This has caused some to raise the notion that institutional interest in the market is slowing down, while retail interest is the main driver. However, given the industry’s brief history, could this be the case?

Bloomberg recently reported on somewhat worrying statistics regarding cryptocurrency funds. Per the report, almost 70 such hedge funds have closed this year alone. Most of them were supposedly serving wealthy individuals, pensions, and family offices. 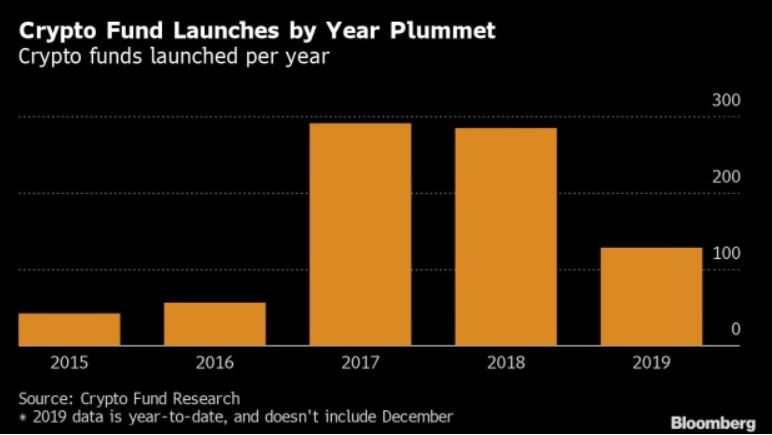 Additionally, the report also shows that the number of newly-launched crypto-focused funds has declined notably as well. Reportedly, there are less than half new funds started in 2019 compared to the same time last year.

The most apparent reason is purportedly related to the volatility of Bitcoin and the whole market, which may be scaring some institutional investors. The largest cryptocurrency entered 2019 at $3,700, before skyrocketing to almost $14,000, and then retracing back to $7,000 with several extreme swings.

Institutional involvement in the cryptocurrency market is undoubtedly a hot topic among the community and not only. However, there are several things to be considered when the matter is brought to light.

First things first, institutional investors have several options on how to invest their money in a controlled manner, which is not narrowed down to specialized funds. Among the pioneers in the industry is the Grayscale Bitcoin Trust, a vehicle designed to provide exposure to Bitcoin’s price without having to worry about its underlying storage and safekeeping. In its Q3 report for 2019, Grayscale outlined that the inflows in the trust were $171.7 million, which is an unprecedented amount in its history.

Bakkt, the Bitcoin futures trading platform of the Intercontinental Exchange (ICE), launched in September this year, and it’s also geared towards institutional investors. While the first trading weeks had minimal volume, the platform’s volume is increasing notably over the last few weeks. Just last week, the Bakkt Volume Bot recorded over $40 mil traded in a day.

Amid all of the above, Spencer Bogart, a general partner at Blockchain Capital, also raises a valid point regarding the notably brief period of existence of the cryptocurrency market, in general.

“Taking a step back, I think some would argue that the levels of institutional adoption are disappointing or underwhelming, but, of course, this view depends entirely on expectations. To me, the fact that there is any institutional adoption for Bitcoin only ten years into existence is a radical success and beyond what anyone could have imagined just 3 or 4 years ago.”

Deloitte Survey: Almost Twice as Many Companies Use Blockchain Compared to Last Year

With The Latest TikTok Pump, Binance and OKEx Invite Their Traders To Short Dogecoin (Doge)

How Does Bitcoins Rise Affect The Altcoins?

Bitcoin Price to Continue Upward Trajectory Over the Next 5 Years Banks Are Cutting 75,700 Jobs Worldwide
Scroll to top