Crypto Blog
You are here: Home / Crypto Blog / Bitcoin / Ride the Bull While Preparing for the Bear

Editor’s note: At Early Investing, we believe in holding diverse portfolios. Our diverse portfolios happen to include pre-IPO startups and cryptocurrencies. That’s because the potential returns justify any risk involved. Other sectors of the market have investments with higher risk factors as well. And it’s worth looking into them. 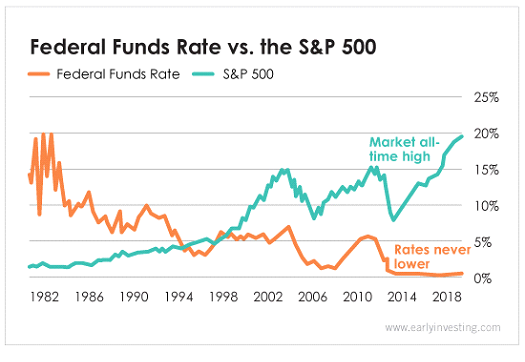 The bull market has treated long-term traders well for more than a decade. But the rise in interest rates by the Federal Reserve, as well as signals from Chairman Jerome Powell for two more hikes this year, has triggered some upsetting memories for investors.

While the market was peaking, interest rates were bottomed out – effectively at 0% for seven years – as displayed in the chart above. And the markets charged upward.

When that orange line starts to go back up, though, it signals volatility and risk in the market.

This isn’t a new phenomenon. Historically, when the Fed reacts to rising inflation with a quick succession of interest rate hikes, bad news in the market often follows. It happened in the ’70s, ’80s, ’90s and in the lead-up to the 2008 crash.

This is causing some investors to take on a broader diversification strategy… including bear-proof investment classes like cryptocurrencies and bonds.

On the surface, bonds and cryptocurrencies are positioned on opposite ends of the asset class spectrum. But they have more in common than meets the eye.

For the young, risk-inclined investor, holding some crypto is a no-brainer. The “boring” stability of bonds is more closely associated with the retiree. But because of crypto’s lack of correlation to the stock market and bonds’ historically inverse correlation to stocks, both are seeing renewed interest from savvy investors who see a possible end to this bull market.

It’s also worth noting that there are big profits to be made in bonds… if you know where to look. The bond market isn’t just Treasurys and investment-grade bonds, after all.

Is a bear market coming? Eventually, yes, though we don’t know when. But when you spread your risk among various asset classes, there really isn’t much to worry about.

The post Ride the Bull While Preparing for the Bear appeared first on Early Investing.

Protect Your Portfolio While You Can