This has been a busy week filled with important news and information. So today we’re doing a news round-up — along with brief commentary on each story. Let’s go.

One of my favorite financial analysts, Lyn Alden, posted the following commentary and chart on Twitter this week:

The S&P 500, as priced in gold, looks a lot less weird than as priced in dollars, since it cancels out some of the stimulus/QE effect.

Ever since U.S. GDP growth peaked in Q3 2018 in rate of change terms, the S&P 500 as priced in gold keeps making lower highs and lower lows. 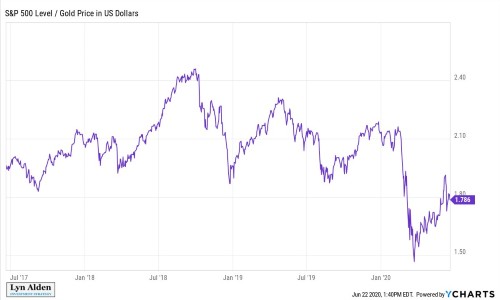 Gold (and silver) remain my favorite safe haven investments, along with a healthy dose of bitcoin acting as a speculative bet on money printing. For me, BTC serves a similar purpose as precious metals do. They’re both bets on huge deficits, Modern Monetary Theory and QE going forward. Bitcoin has potentially higher returns than gold, but it carries additional risk.

Investors are worried about the stock market. Here’s how CNBC reported the story:

A record percentage of money managers believe the stock market is “overvalued,” according to the Bank of America Global Fund Manager Survey, one of the longest-running and widely followed polls of Wall Street investors.

Seventy-eight percent of investors say the market is overpriced, the highest percentage since the survey began in 1998 and exceeding the levels when the dot-com bubble burst in 1999-2000.

The survey queried 212 mutual fund, pension fund and hedge fund managers. It’s clear that most people seem to realize U.S. stocks are expensive. But with the Fed pumping markets higher, prices may go up even more. And with many bonds yielding nothing, or even negative rates, it’s going to be an interesting next few years. I continue to favor high-yield emerging market stocks over U.S. markets.

One of Germany’s largest fintech companies, Wirecard, filed for insolvency this week. Wirecard has long been a target of short-sellers who have alleged accounting fraud (since at least 2008). The matter finally came to a head this week. And the company’s shares crashed from more than $58 on June 17th 2020, to less than $2 today.

The Wirecard case demonstrates how difficult it is to make money shorting stocks. Even if you were correct in 2008 and bet against Wirecard, you would have gone broke shorting the stock long ago. Read more about this fascinating story in this thread about “winners and losers” on Twitter.

“What happens if they stop?” That’s the big question today about the Fed. In theory, the Fed can’t prop up the markets forever. Yet I think it’s pretty clear by this point that they can’t stop. The economy would melt down. Legendary investor Howard Marks sums up our current situation well. Here’s an excerpt from Business Insider’s reporting:

Billionaire Howard Marks has questioned whether a market rally that has seen stocks jump from their early pandemic lows in recent weeks is sustainable once the Fed stops “levitating the markets.”

The famed investor, who is the co-founder and chairman of Oaktree Capital Management, told CNBC in an interview this week: “It looks to me and many other people that the markets are somewhat ahead of themselves.”

I don’t see any way out of this situation other than continued money printing. Any weakness in markets or the economy will be met with more. One important question is, how long can it last? That’s very hard to say. But it will likely last longer than we think it should.

Day traders will have fun until they get wiped out

A large amount of empirical evidence confirms that most day traders lose money. A very large 2004 study of Taiwanese day traders, for example, found that more than 80% lost money. A tiny number — about 0.03% — earned consistently large profits, but the odds of possessing this kind of skill are slim. Most studies of day traders in the U.S. and Finland yield similar results — a few traders are consistently good, but most lose out.

In this study, 80% of day traders lost money. Be careful out there folks. And if you haven’t read last week’s piece about the dangers of day trading, I recommend doing so now.

Advice to the young: You don’t have to listen to anybody. You can learn everything from your own personal experience. Of course, you will be at least 50 years old by the time you know what you need to know at 25.

A Pure Marijuana Play for a Growing Market