Everyone who has ever attempted to plan a foreign journey on their own must agree that this task isn’t for those weak in spirit. While the internet nowadays offers a million of ways to book a hotel room, buy a plane ticket, or simply find out what the destination country has to offer, when it comes to practice, things don’t usually go smooth.

The least pleasant part of that experience is the need to cross check everything; sift through dozens of offerings that go on top thanks to SEO people hotels or airlines had wisely hired; the need to visit numerous booking websites that have nearly similar functionality, and so forth. Additionally, such services tend to charge a substantial fee for making things less awkward for wannabe travellers, which in case of Booking.com may go up to 20% of the offering itself.

There are, however, other, less obvious, issues that travellers face. These things include cultural differences between their home and destination countries. For instance, Westerners usually have no idea that when they come to a primarily Buddhist country, they should avoid touching another person on the head by all means, or never point their feet in the direction of a Buddha statue. Again, there are websites that forewarn people from making such mistakes but usually it takes one to think about such things first which isn’t always the case.

The language barrier is also the issue: while major hotels and services abroad have English-speaking personnel, the very level of their language acquisition may be not what one could desire. On top of that, even though some smaller providers might have superior service, their lack of English acquisition would never place them in the attention span of a tourist.

Most tourists tend to visit must-see locations like Rome, Bangkok or London. This effectively overcrowds such cities and makes things uncomfortable even in terms of infrastructure whilst stealing the sense of authenticity, which most tourists are actually after. At the same time, less known but by no means less interesting places in the same country struggle to attract anyone to their boundaries, which creates a staggering disproportion in income.

And finally, not all people are those of good will. The risk of being scammed or facing problems with local law enforcement is substantially higher in a foreign country. Information on typical con techniques or dangerous locations in different countries is scattered across the entire internet, and could be found in relatively unknown blogs or deeply hidden recommendations on your foreign ministry’s website, and accessing it may not be that easy.

Blockchain-powered project Smart Trip seeks to tackle all those issues by creating a platform that would bring everything a traveller needs to one place.

The platform’s creators see their brainchild as Facebook meets Booking.com. It will enable users to plan their entire trip in one go, including plane tickets, transfer, room booking, excursions, and so forth while giving them useful tips on what to do and what not to do, how to avoid scams, where to eat, and so forth. Added to that is a virtual phrasebook supervised by native speakers, weather reporting, and an emergency tips section that works even offline.

The most important thing that Smart Trip tries to do, however, is that it offers a social network functionality. Users may post their photos and reviews regarding any location they have been to, join group chats for those who are going to visit the same country, or even find so-called travel gurus, i.e. senpai travellers who have been to a certain country for many times and know all nuts and bolts there, and who will act as guides in exchange for sharing their expenses with the rest of the group. The solution, therefore, connects fellow travellers to each other and makes the world a bit more open for everyone.

Users will be able to post their own experiences online with photos, whilst the rating system will place the most high-rated reviews to the discovery section. Thanks to the social media functionality, business owners will be able to directly communicate with their possible customers, thus reaching audiences that had been unavailable to them before. Tourists, on the other hand, will be able to discover new locations and places, and find great service there.

To solve any potential disputes between the platform participants, Smart Trip will offer an arbitration system involving the most active users as arbiters. It will implement the Decentralized Autonomous Organization model as the most scalable and credible solution.

The platform will employ blockchain tech and smart contracts to make payments between all parties secure.

“Our goal is to create a global community of travellers. The world is becoming more and more globalized, and our solution will bring people from different countries even closer together, and make things unforgettable for them,” Ronald Slobodchikov, COO and co-founder says.

For now, the founders started building that global community of travellers on social media channels, such as Telergam.

The biggest problem with such projects is well-known: while it all may work pretty smoothly on blockchain with cryptocurrencies involved, major players like airlines or hotels are usually less than willing to accept anything but fiat currency. The project’s whitepaper, however, suggests that that won’t be the case for Smart Trip: while the user may use their TASH tokens to pay for a ticket, it will be converted into local currency for the service provider. Smart Trip is also going to issue debit cards for its users that will enable them to pay for all journey-related expenses on the go with their tokens, which will be sold on the forthcoming sale event later this year. 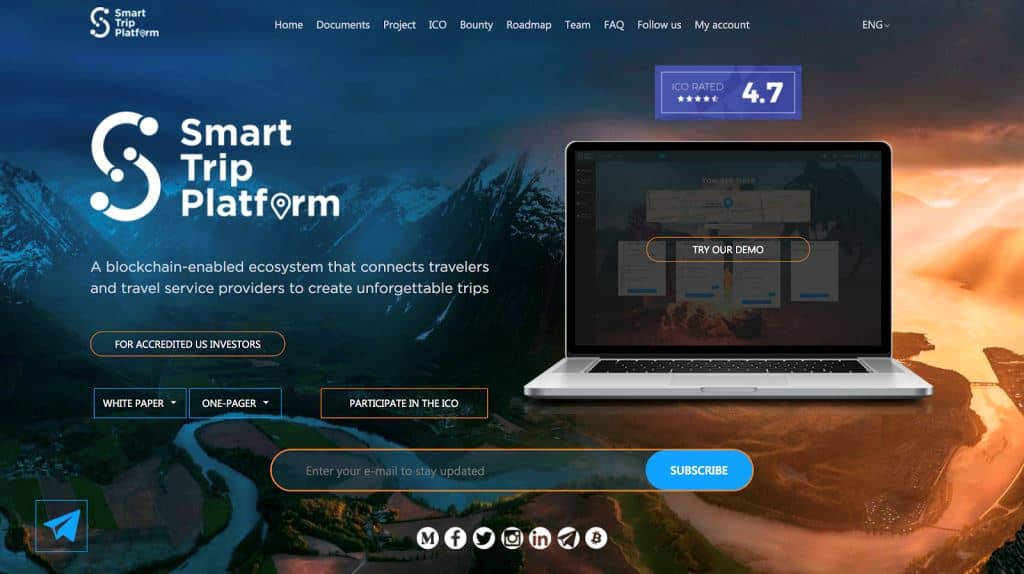 When it comes to blockchain-based projects that seek to raise funds via public sales of their tokens, there’s always some uncertainty regarding the future of said projects. Some of them, while delivering things as promised, still miss mainstream recognition, so it remains to be seen whether Smart Trip will make it. However, the project’s founders claim they’re currently in negotiations with some undisclosed stakeholders in the industry, so the project has some chances to take off, provided everything goes as planned.

Still, the very attempt to build such a complex infrastructure that will make travelling easier while bringing people from around the world closer together and effectively creating a worldwide community of travellers that don’t have to deal with currency exchanges or bad service, is quite laudable.