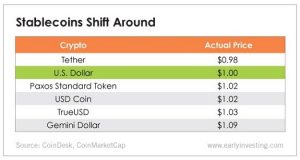 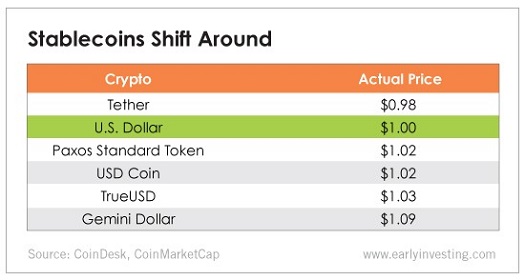 Stablecoins are meant to hold steady. Their values are supposed to be stable. Several stablecoins, including Tether, Gemini Dollar and Paxos Standard Token, are pegged to the U.S. dollar, redeemable at a 1-to-1 rate.

But lately, several of these U.S. dollar-pegged coins are trading either higher or lower than the dollar they’re supposed to match. It’s an interesting reflection of how the market perceives risk.

Tether was the first to fall below the dollar mark, dropping to roughly $0.87 before climbing back to $0.98. Tether is the best-known stablecoin. It currently has a market cap of around $2 billion. That’s the eighth-largest market cap among all cryptos, according to CoinMarketCap. But as I write, the market is discounting it.

Meanwhile, Gemini Dollar – which has a market cap of less than $1 million (ranked at 1,694 on CoinMarketCap) – saw its price rise more than $0.10 above the dollar.

In some ways, this could be a matter of trust. Last year, Tether was dogged by rumors that it didn’t have sufficient dollar reserves to back all its tokens. Tether’s woes don’t stem from the stablecoin model of being linked to a real-world asset, but from the company itself. Its confusing legal disclaimers and lack of transparency were the real problem.

The company’s focus on regulatory transparency contrasts markedly with other stablecoin projects, which have come under fire for their failure to produce a verifiable audit of their accounts.

Transparency is key. For a stablecoin to fulfill its purpose as a standardized, reliable store of value, it needs to be clear on how it will achieve that goal. Whether it’s pegged to a fiat currency or another crypto, collateralized, backed by another asset or redeemable, it needs to lay out those terms and explain to users how it works.

There are more than 2,000 cryptocurrencies in existence. And with crypto’s historical penchant for volatility (which has declined recently), stablecoins can be an appealing alternative, especially in countries experiencing runaway inflation. It provides safe exposure to the U.S. dollar.

Stablecoins also make it easy for users to perform quick crypto transactions without having to convert crypto into fiat or calculate how much it’s costing them in dollars, pounds, yen, etc. If the coin is already tied to the fiat currency, its exact worth is easily known.

As always, do your research before putting money into a stablecoin – or any crypto.

Despite Growing Pains, the Hemp Industry Has a Bright Future

PR: Xsolla Adds MobileGO (MGO) as New Payment Method for Developers and Gamers... WinMiner Lets Anyone Mine Cryptocurrency With Just One Click
Scroll to top