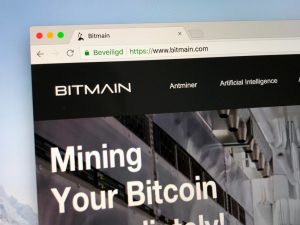 Bitmain, the world’s leading maker of cryptocurrency mining chips, is planning to raise up to $18 billion in a Hong Kong IPO.

In 2017, Bitmain produced roughly 77% of all bitcoin mining equipment, and it has a huge share of the altcoin mining hardware market as well.

The company had a great 2017, producing around $1.3 billion cash flow on $2.5 billion in revenue. At first glance, it appears to be a beautiful business model and possibly a safer way to get exposure to crypto.

However, I am steering clear of this IPO, and I believe it’s far riskier than most people assume. Here’s why…

As the world’s largest producer of bitcoin hardware, Bitmain feels it should have a large say in the direction of the coin.

Bitmain has disagreed with the bitcoin community on many critical issues, and things came to a head last year. Bitmain eventually threw its full weight behind “bitcoin cash” (BCH).

Bitcoin cash is a “hard fork” of bitcoin. In my view, it’s a cheap copy of bitcoin with a few major differences. Bitcoin cash has a much larger “block size” than bitcoin, which means it can process more transactions per second.

A larger block size, however, comes with significant downsides. It means the blockchain will grow in size much faster than bitcoin’s. And since every transaction is recorded, it takes a long time to sync and update.

There are other significant issues with bitcoin cash. In fact, just last week, a critical bug was discovered by a bitcoin developer. The developer reported the bug discreetly to the bitcoin cash team, and it was fixed before anything bad happened. But it could have been disastrous.

There’s a good reason that the real bitcoin community takes a cautious approach to upgrading the coin. In crypto, everything must be tested extensively before it’s released. From what I’ve seen, the bitcoin cash team does not take the same approach.

Bitmain has made it clear that it thinks bitcoin cash is the future of cryptocurrency. And it’s putting its money where its mouth is.

From what I can tell, Bitmain has been selling all the bitcoin it mines and buying up more bitcoin cash with it.

Recent reports reveal that Bitmain has now acquired approximately 1 million bitcoin cash tokens, some 5.7% of the total supply of 21 million.

So… Bitmain is selling real bitcoin to buy a new, untested, questionable coin? And it’s about to go public? It seems like madness to me.

Meanwhile, over the last six months, bitcoin cash is down 58%, while bitcoin is down 36%. It makes me wonder what the price of bitcoin cash would be if Bitmain weren’t propping it up…

Bitmain could have been an amazing company, if only it had stuck to building great mining machines. Instead, it’s built a politically charged giant that is constantly angering multiple crypto communities. And the company is about to face a lot more competition.

Analysts at Bernstein Research put out a report about the upcoming Bitmain IPO, and it isn’t flattering. I think this line sums it up pretty well: “cash flow appears to be questionable and the company may be gradually losing technological edge.”

My advice: Steer clear of the Bitmain IPO. If you want exposure to bitcoin cash, there’s a much more direct way to do it (that would be buying it, but I don’t recommend that either).

If you’re looking for stocks with exposure to the crypto mining world, I like a company called HIVE Blockchain, which trades on the Toronto Stock Exchange and on the U.S. OTC market. I believe it’s much more of a “pure play” on the crypto mining market. It has healthy revenues and expanding operations. And the stock has pulled back significantly from all-time highs.

I met with members of the HIVE team at a recent conference and came away from the conversation extremely impressed. HIVE has mining operations in ideal locations such as Iceland, where it’s cold and electricity is cheap and renewable. It has a top-notch team, and I consider the company to be one of the very few high-quality crypto stocks in the world. (Note: I currently have no position in the stock.)

The post Steer Clear of the Bitmain IPO appeared first on Early Investing.