The first ever blockchain-focused summit to run during the South By South West festival is set to be held in Austin, Texas on March 12 and 13, with the topic of women in blockchain set to headline the agenda. Held at the Kimpton Hotel Van Zandt, the CryptoFriends Crypto Summit in association with Superbloom and Photon is dedicating the entire first day to ‘New Girls on the Block’ – a series of fireside chats, panel discussions and keynotes presented by some of the leading women in the blockchain community.

Women currently comprise just 5% of startup owners and last year venture capitalists invested just $1.46 billion in women-led companies compared to $58.2 billion in investments for male-led ones. Blockchain represents arguably the best opportunity to level the playing field for women in tech thanks in part to the opportunity to crowdfunded startups through Initial Coin Offerings (ICOs). Yet gender diversity remains a challenge, which is why New Girls on the Block aims to showcase female blockchain pioneers in front of an influential, international SXSW audience and demonstrate the important role women are playing in the industry.

The stellar line-up of speakers includes:

CryptoFriends CEO Daria Arefieva says, “There are some incredibly talented and successful women in the Blockchain community already doing amazing things. Yet at most industry events it’s still typical to see far more men than women. In fact, a recent survey revealed that women make up just 1.76% of the Bitcoin community. Blockchain is one of the most disruptive technologies in the world that will change the world as we know it, so we want to encourage more women to get involved and lead the way in moulding its future.”

The SXSW Crypto Summit is a unique opportunity for both existing blockchain enthusiasts and the crypto-curious to hear from the community’s leading experts. In addition to New Girls on the Block, the event will feature a mix of educational content, debates, ICO investment pitches and unique networking opportunities.

The summit also represents a golden opportunity for blockchain start-ups to pitch their ICOs live to prominent investors on day two. ICO pitches are a regular feature at CryptoFriends events, with millions of dollars raised through token sales launched at previous events. ICO teams can apply for a place by visiting Crypto Friends official web.

Tickets are priced from $399 and are available via the CryptoFriends website. This event is happening in parallel with the SXSW2018 festival, but is not on the SXSW calendar or affiliated with the show directly in any way. 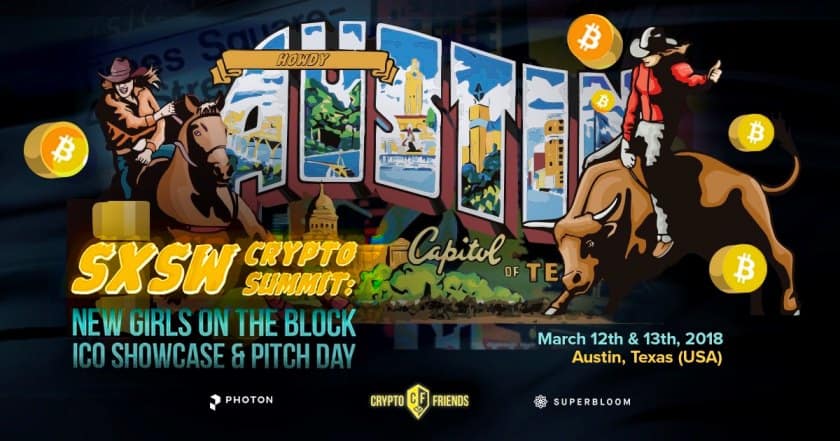