Crypto Blog
You are here: Home / Crypto Blog / Bitcoin / Tale of the Tape: Bitcoin vs. Gold 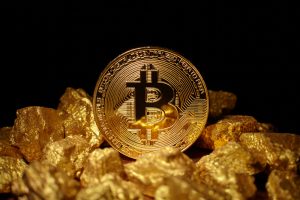 Bitcoin is hard to describe, so we often use analogies.

“Digital gold” is the most popular way to summarize bitcoin’s purpose.

Today we take a deep dive into this analogy to see how gold and bitcoin stack up.

Still, that’s pretty significant, considering bitcoin only started in 2009. Gold has been money for thousands of years.

Both have the rare qualities that make a good speculative “store of value” asset.

Both are used as hedges against reckless monetary policy. They are assets that will likely rise in value if the old system becomes overloaded with debt (U.S. debt is at $21 trillion and counting) and is forced to “monetize” (print away) the debt.

This is why scarcity is an important quality. There’s a limited supply of gold around the world, and there will only ever be 21 million bitcoins (with each bitcoin divisible into 100 million pieces).

Importantly, both assets can also be held by individuals. Stocks and bonds typically require a broker or bank to hold custody. This introduces “counterparty risk.” In other words, there’s always a small chance that the other party may go bankrupt and take some of your assets down with it.

I don’t think gold is replaceable. There’s something about gold that will always be desirable to some people. And its price is stable compared to bitcoin.

Bitcoin and other cryptos are something altogether different. They are the beginning of an alternative monetary system. One that people opt into rather than inherit.

Sure, bitcoin could be the size of gold eventually. But I think surpassing gold could be just the beginning.

Remember, all the money in the world, including digital cash, is worth roughly $80 trillion.

But for the first time in history, it’s not a given that government money will dominate the market. A race has begun to capture market share of money. It’s the largest market in the world. Bitcoin has only a tiny sliver of that market today. But it’s growing extremely fast, and new coins are launching daily.

Unless a miracle happens, the old systems are headed for trouble. Debt continues to pile higher, and the interest payments on that debt are about to increase rapidly as interest rates rise. It is very likely many governments will resort to printing money to pay off their own debts.

It’s not often that an $80 trillion market is vulnerable. Yet that’s the opportunity I see for crypto today.

Sure, there’s a chance it will fail, or government will shut it down. I don’t expect it to happen, but it’s possible.

This is why you should limit crypto to a small portion of your portfolio, say 1% to 3% if you’re a conservative investor. A bit more if you’re okay with risk and can afford to lose the money.

The post Tale of the Tape: Bitcoin vs. Gold appeared first on Early Investing.

News Fix: CBD Products Could Still Make You Fail a Drug Test
Smart Blockchain Investors Are Opportunists
Why Is Buffett Lashing Out at Bitcoin?
Equity Crowdfunding Improving as It Turns 3
Mailbag: Steering Clear of Small Caps, Finding Cannabis Stocks
What I Look For in Startup Deals
Illinois Set to Expunge More Than 700,000 Pot Crimes From Criminal Records
News Fix: WeWork Isn’t the Only One Cleaning Up Its IPO Mess

The 6 Top Cryptocurrency Alternatives to Bitcoin