Crypto Blog
You are here: Home / Crypto Blog / Bitcoin / The Blockchain Can Advance a More Efficient and Honest World 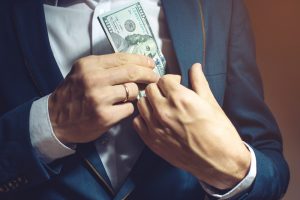 I have good reason NOT to trust the government.

It stole something from me.

It did it in such a brazen manner that even now – 20 years later – I get mad whenever I think of it.

It involved a public bid. A big tank cleaning job. My company, based in Jakarta, had been eyeing it for a while.

We won the bid – a good feeling. The story should have ended there.

In most countries, it would have.

But Indonesia isn’t most countries.

If you’re not taking a bribe, you should be giving one.

Fifteen years ago it was much worse. I’m sure it rated well above 100.

So let me tell you what happened.

After winning this project, we received a signed, sealed and stamped letter from the government agency whose project it was.

And that happened to be Pertamina, Indonesia’s big, bloated and corrupt state agency involved in the country’s oil production and trading.

The vice president who ran our Jakarta office – James T. – was summoned to a meeting by a Pertamina official. This is how he described it to me…

I entered this enormous boardroom at Pertamina headquarters. At the far end of a long table sat an official whom I had met once or twice but did not know very well. He greeted me like we were old friends.

He then told me there was a small problem. He had found a small error in the approval letter sent to us. He asked for the letter, explaining he’ll fix it and return it in five minutes. He returned 20 minutes later and said he found a couple more errors. He said he needed to keep the letter and I could pick it up the next day. As I left the room, he said he’d call me in the morning.

James never saw or heard from him again.

Nor did he ever see the letter again.

Two weeks later, Pertamina issued a new letter to another company. We learned that the copy James had made carried no legal standing because it was not the original.

We were, in a word, screwed.

Later on, we found out that the Pertamina official James had met was given a generous bribe by the new winner of the project. Surprise, surprise.

Of course, I’m not the only one this stuff happens to. You and I know… IT HAPPENS ALL THE TIME.

Just recently, for example, countries from Peru to Mexico were rocked by a big scandal involving the Brazilian construction company Construtora Norberto Odebrecht. It had paid bribes to a number of government oil officials (of course).

Kickbacks at Brazil’s Petrobras and Mexico’s Pemex were unearthed. Ecuador’s vice president was put behind bars.

According to Reuters, the company has paid $3.5 billion in settlements in the U.S., Brazil and Switzerland.

For every company that’s caught (like Odebrecht), I bet there are 100 running around handing out gifts to their favorite officials.

Based on my global business experience, I’d say that in a good 50 countries, it’s impossible to do a sustainable level of business without handing out bribes.

The U.S. isn’t one of those countries. Here it’s a little subtler…

A network built on mutual back-scratching at the highest levels of government, business and entertainment exerts a nefarious influence on how deals get done.

If you’re on the outside looking in, it stinks.

Just a couple of years ago, I would have said to those outsiders, “Deal with it.”

It’s the way of the world. Nothing you can do.

With the advent of trustless blockchain technology, I’ve changed my tune.

The blockchain itself confirms a transaction. No middleman (like a bank) is needed.

And you can put all kinds of things on the blockchain, not just payments.

For example, you can put government projects and public bids on the blockchain. Hmmm…

The blockchain applied to public contracts – what a great idea!

It’s turning into a reality, thanks to a team of university graduates from Mexico who initially developed it.

Imagine if government officials knew this was in place.

Such a technology wouldn’t stop bribery altogether, but it could make a serious dent.

For example, I’m not sure how it could expose one subtle form of favoritism – structuring a bid to play to a particular company’s strengths.

(Confession: I’ve played this card myself back in the day. It’s very effective.)

It’s definitely a step in the right direction.

I would love to see public projects won based on sophisticated algorithms embedded in the blockchain. No human intervention.

It would empty out hundreds of buildings around the world filled with government pencil pushers.

That’s the beauty of the blockchain. It gets rid of the middlemen, the gatekeepers, the toll takers.

And it eliminates the rent – that also can take the form of bribes – for the users.

Massive adoption of blockchain technology would make the world not only more efficient but also more honest.

How great would that be?

The post The Blockchain Can Advance a More Efficient and Honest World appeared first on Early Investing.

Tokenbox Quarterly Report: the team expects to start the platform in Q2
Scroll to top