Bitcoin lost a serious chunk of its Dollar value this week. Down about 12% over the past seven days, the cryptocurrency is currently trading at around $8,700. It’s essential to see where it goes from here. From above, there’s the 200-days moving average at $8,800, which has now turned to resistance. Bitcoin hasn’t closed a day below the 200MA since January 27th this year, and it’s entirely possible for today to be the first day. This would probably spell trouble for the bulls.

All of this comes amid the growing spread of the coronavirus. Confirmed cases are coming from all over the world from countries such as the US, Italy, the United Kingdom, and so forth. This has undeniably taken its toll on the entire global market. In China, reports have it that the country will delay the launch of its central bank digital currency mainly because of the virus, though they still expect to have it launched in 2020.

The S&P 500 marked its quickest correction in history. The index lost more than 10% in a little more than a week while all other major indexes are also declining rapidly, day after day.

Besides Bitcoin, altcoins felt the impact as well. All large-cap cryptocurrencies are trading in the red over the last seven days. More than $24 billion were wiped off the total capitalization. On the other hand, Bitcoin’s dominance has increased. This further signals the overall troublesome situation for altcoins, which struggle to claim new grounds.

In any case, health officials across the globe expect the situation to probably get worse before it gets better. With this said, it’s interesting to see how Bitcoin will respond to the catastrophe in the traditional markets. 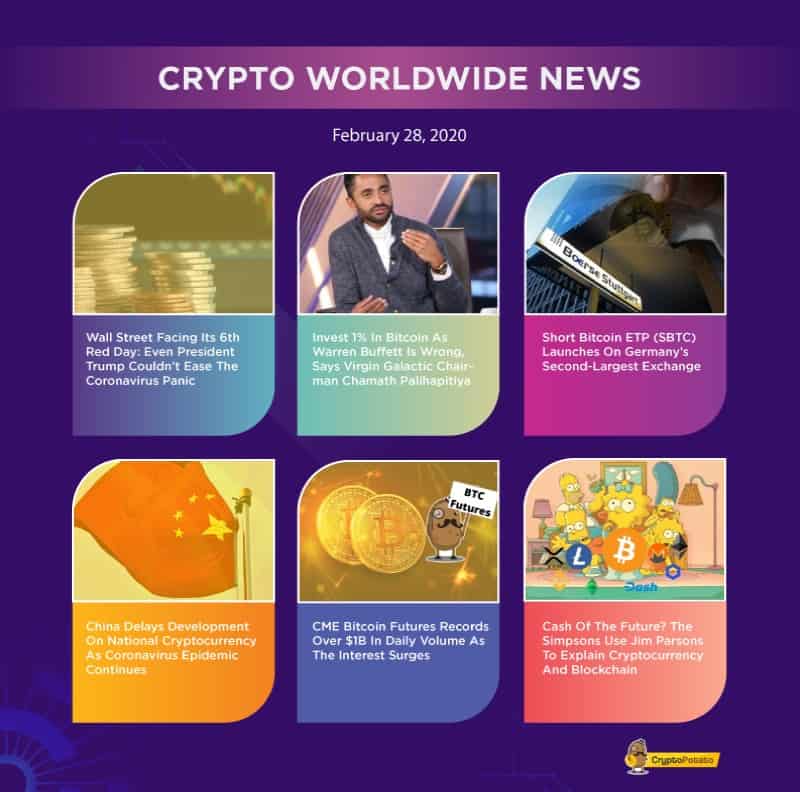 Wall Street Facing Its 6th Red Day: Even President Trump Couldn’t Ease The Coronavirus Panic. Global stock indexes have crashed severely over the past ten days. The S&P 500 marked its quickest downward correction in history. This comes at times of economic uncertainty as the coronavirus continues to spread. Meanwhile, Bitcoin has also lost about $1,500 over the past week.

China Delays Development On National Cryptocurrency As Coronavirus Epidemic Continues. Earlier this year, Chinese officials said that they’d be the first to launch a central bank-backed cryptocurrency. However, as the coronavirus continues to spread, the project will be delayed. It is still expected to become a reality in 2020.

CME Bitcoin Futures Records Over $1B In Daily Volume As The Interest Surges. The increase in Bitcoin’s price throughout 2020 was followed by a notable surge in the volume of future traded contracts. More specifically, CME’s Bitcoin futures contract has recorded days with over $1 billion in traded volume.

Cash Of The Future? The Simpsons Use Jim Parsons To Explain Cryptocurrency And Blockchain. The Simpsons, one of the most popular animated mainstream TV series in the world, dedicated a segment on cryptocurrencies and Bitcoin. In it, a character presented as Jim Parsons explained how digital currencies worked.

This week we have a chart analysis of Bitcoin, Ethereum, Ripple, Bitcoin Cash, and Chainlink – click here for the full price analysis.

The post The Coronavirus Nightmare Continues As Bitcoin Loses $1500 This Week: The Crypto Weekly Market Update appeared first on CryptoPotato.

Bitcoin Price Analysis: Following The Massive BTC Sell-Off, Is The Correction Over?