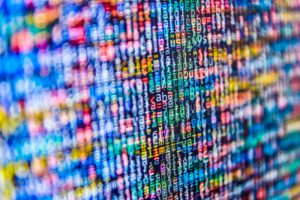 Each reinforces the other. Data isn’t worth much without plugging it into algorithms. And algorithms need massive amounts of data to detect patterns and make predictions.

As people in society come to grips over just how much data is being collected about them, the debates over the use and misuse of data and just who owns that personal data will intensify.

We’re at the beginning of an era-defining power struggle and resource war over data ownership and usage.

This is about more than money and who benefits from the monetization of personal data. If information is power (think Google or Facebook), then power will flow to whomever captures, controls and owns information. And those who cede information and data to others will become increasingly powerless.

Personal data is a sought-after resource in this new, high-tech world. Just as the new machines in the Industrial Revolution ran on coal and oil, the learning machines and artificial intelligence capabilities of the current tech world run on data – the more the better.

The debate over who owns and controls this data isn’t going away. And its resolution will go a long way toward shaping the kind of world we live in.

The Emergence of Personal Data

Let’s start by defining personal data. I like France’s definition – any information relating to an identified or identifiable individual.

It could mean something as simple as your age. It could also mean the information contained in your medical records or bank records.

For example, how many times did you change lanes while driving to work or the store today? One day that data point will be worth money – whether it’s for safer roads with more self-driving vehicles on it or cheaper car insurance.

While every data point imaginable has a potential use and price attached to it, in today’s world, biological data (information on your own body and DNA) is especially sought after.

So how much is it worth? Well, that depends.

Network Effects and the Value of Genetic Data

It’s worth a lot, according to GlaxoSmithKline. It paid 23andMe $300 million last year to access its vast collection of genetic data. A large data set can attract a lot of money.

But if you don’t have a lot of data, it’s not worth nearly as much. In its filing with the Securities and Exchange Commission (SEC), startup LunaPBC puts the value of a whole human genome at 300 of its shares. That comes to the grand sum of $21.

LunaPBC has a great idea, though. It wants you to share your health information and DNA data with it and will offer you shares in return. It even got SEC approval to recognize health data as currency. That’s a huge breakthrough.

I hope it succeeds. But it’s not exactly making consumers an irresistible offer for their personal data. In its offering circular, it lists 20 days of nutritional data as being worth $0.14. Your annual health record earns you another $0.14. Your whole microbiome is worth $3.50. It’s a little underwhelming.

But Luna has the right idea. And it’s just one of a growing number of companies willing to give you compensation for personal data while building a crypto fortress or other defenses to protect and anonymize your data.

The pathway to monetize data is much clearer for GlaxoSmithKline than it is for Luna. GlaxoSmithKline is developing dozens of drugs. If the data it gets from 23andMe helps turn just one drug into a blockbuster product, the $300 million it paid will look like a steal.

On the other hand, Luna is just beginning to collect data. As its data store expands, so will its worth.

It’s not all about the compensation, though. Shouldn’t people also have a say in (if not control over) what their data is used for? My data are my words. And I’d be extremely angry if Early Investing took all my articles, put them in a book, made a million dollars and gave me nothing.

But we’re at the dawn of the big data age. It’s not yet obvious to most people that all kinds of data have worth. Some people vastly underestimate the value of data, believing it’s worth very little, if anything. Others vastly overestimate the worth of data, especially their own biodata.

I did a little experiment last week. I told my 30-something daughter and her husband about 23andMe’s $300 million deal with GlaxoSmithKline. My daughter was clearly irked. “If you want to know how I feel, read this article,” she told me. It’s a scathing critique of the deal.

I expected her husband to take the opposite view (they never agree on anything). Sure enough, he told me, “Personally, it doesn’t really bother me.”

Opinions on this contentious subject vary. As for me?

I hate the idea that unknown entities may know more about me than I do… and may be using my personal data for their own ends – whether I agree to it or not. I don’t want Google, Facebook, my doctor or my bank to own, control, use or sell my personal data. I certainly don’t want it to fall into the hands of the government.

Tech created this data ownership problem. But it can also create the solution.

The post The Fight Over Data Ownership Has Just Begun appeared first on Early Investing.

Investing in Bonds Doesn’t Have to Be Boring