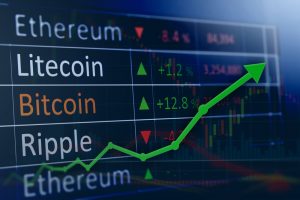 I met Jim in Florida while taking a break from work about a month ago. My friend Mike said I had to meet this guy.

“He loves crypto. You’re a bit of a skeptic of all things, Andy, but this guy is a true believer.”

And according to Mike, Jim has made a ton of money off crypto.

From the looks of it, Jim is in his late 20s. He founded a local brewery two years ago and probably makes the best sour beer in Florida (he gave me a six-pack). But he wasn’t really interested in talking about his brewery.

He wanted to talk bitcoin.

Jim wasn’t part of the original “true believer” club of developers, coders, libertarians, world-changers and cypherpunks. He’s been mining and investing in crypto for about 18 months – before crypto took off in early 2017 but way after the majority of original true believers got in around 2014.

“I talk to these true believers all the time,” Jim said. “They’re young entrepreneurs like me… they’re into craft beer and surfing – my two things – and they enjoy talking about their jobs. They’re very honest. They’ll talk about problems and progress, including pending announcements.”

“Meaning,” I said, “you see jumps in price before they happen. That’s convenient.”

Jim pushed back: “It helps, but believe me, I check on a lot of things before committing to investing in or mining their coins.”

I had fun talking to Jim, and he shared with me some of the message boards and crypto chat channels he uses to keep up with this incredibly dynamic investment space.

I’ve begun to use some of these myself (like discordapp.com). And even though I don’t belong to the original tightknit club of young believers, I had no trouble getting people to respond to my questions and comments.

Can’t ask for more than that.

It got me thinking about the different waves of investors who have been discovering, following and buying crypto through the years.

I can’t say this enough…

It may not feel early, but it really and truly is.

Data from Coinbase shows that 95% of cryptocurrency wealth is held by 4% of the owners. That’s not surprising. It’s exactly what a nascent market should look like.

You’ll see a relatively modest number of big winners grow and become a much bigger number.

If you’re thinking of investing in crypto, you’re right on time.

Some of Bitcoin’s Biggest Trades Happen Out of Sight

News Fix: Two Companies at the Intersection of Startups, Crypto and Cannabis