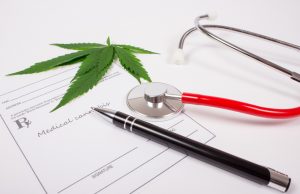 Humans have been using cannabis for fiber, for medicine and – probably – as a recreational drug for 30,000 years.

We know that 30,000 years ago, people in Czechoslovakia were making hemp rope. We also know that hemp fiber started showing up in Taiwan 10,000 years ago. If they were harvesting hemp, you can bet they were eating the seeds and flowers, consuming CBD and a tiny bit of THC in the process. They probably figured out how to make THC-heavy strains too.

We also have evidence of cannabis being used as medicine in China in the year 100. In fact, the Chinese word for anesthesia translates to “cannabis intoxication.” We don’t have many written texts going back any further than that, but I’d say it’s safe to assume cannabis and hemp played a fairly large role in recent human development.

We’re talking about a plant anyone can grow, almost anywhere. It grows quickly and produces medicine, fiber and protein. Cannabis has quite obviously been selectively bred for a while now.

It is within only the last century or so that politicians have made it a crime to consume cannabis. The war on cannabis has been bloody, with thousands dead and millions arrested. But in the last decade, more and more states have legalized medical and recreational marijuana.

Why is the tide turning now?

Epilepsy Community to the Rescue

Activists have been trying to legalize marijuana ever since the federal government cracked down on it hard in the 1960s. The U.S. government stood its ground and even “encouraged” other countries to adopt these same drug laws through the U.N. (almost every country in the world has done so).

It wasn’t until California legalized medical marijuana in 1996 that things started to change. Several other states followed over the next few years. But progress was limited by overly strict regulations. Only adults could use cannabis medicines, and options were extremely limited in many states.

Then the story of Charlotte Figi broke out. She’s a little girl who has severe epilepsy. Here’s an excerpt from CNN’s 2013 reporting:

She was having 300 grand mal seizures a week.

Her heart had stopped a number of times. When it happened at home, Paige [her mother] did cardiopulmonary resuscitation until an ambulance arrived. When it happened in the hospital, where they’d already signed a do-not-resuscitate order, they said their goodbyes. Doctors had even suggested putting Charlotte in a medically induced coma to give her small, battered body a rest.

She was 5 when the Figis learned there was nothing more the hospital could do.

That’s when Paige decided to try medical marijuana. But finding two doctors to sign off on a medical marijuana card for Charlotte was no easy feat. She was the youngest patient in the state ever to apply.

Today, Charlotte, 6, is thriving. Her seizures only happen two to three times per month, almost solely in her sleep. Not only is she walking, she can ride her bicycle. She feeds herself and is talking more and more each day.

“I literally see Charlotte’s brain making connections that haven’t been made in years,” Matt [her father] said. “My thought now is, why were we the ones that had to go out and find this cure? This natural cure? How come a doctor didn’t know about this? How come they didn’t make me aware of this?”

At the time that article came out, it was controversial to say that cannabis could treat epilepsy. Since then, large scientific studies have been completed, and cannabis is emerging as a breakthrough treatment for millions of patients worldwide. It works for pain, epilepsy, inflammation and many other conditions we know of so far.

Stories like Charlotte’s exist in every state that has legalized medical marijuana. In Indiana, it was the Jerger family, who used CBD to successfully treat their 2-year-old Jaelah’s epilepsy. She was having up to 30 seizures a day. From NBC News:

According to the Jergers, CBD’s impact was immediate. Within a week, Jaelah’s seizures were largely gone. It was the miracle they’d dreamed of.

But then they told their medical team in Indianapolis what they’d done, and the next thing they knew, child protective services (CPS) was knocking at their door.

Fortunately, CPS failed to take Jaelah away from the Jergers. Once the public caught wind of the family’s story, the government quickly backtracked. The day after NBC interviewed the family, Indiana’s state legislature passed a law allowing CBD for use in cases like the Jerger family’s.

This is why the wave of cannabis legalization is unstoppable. Cannabis offers such a superior treatment option for epilepsy that even governments can’t ignore it. Telling parents “no” in these types of situations is politically untenable.

This is why I consider the epilepsy community to be the unsung heroes of the cannabis movement. It had the most powerful incentive in the world to change the laws – the lives of children. So the community did it. Epilepsy affects roughly 1% of people. Yet the community’s drive to legalize cannabis was so strong, it succeeded.

These parents’ stories show that if we care enough about the outcome, we can fix systemic injustices. Seems like a pretty timely lesson.

The post The Heroes of Cannabis Legalization appeared first on Early Investing.

Chart of the Week: Blockchain Tech Fueling a Driverless Future

Researcher Claims to Have Sleuthed $90M of Quadrigacx Funds This Week in Cryptocurrency: March 1, 2019
Scroll to top