The blockchain ecosystem is in desperate need of a solution to solve its scalability problem. Today, dozens of Blockchains exist for people to securely purchase, store, and transfer cryptocurrencies. However, many of these Blockchains are incapable of achieving faster transaction speeds without compromising security or decentralization.

To solve this problem, the Mixin Network is creating a cross‑chain solution that consists of three core features:

With the provision of these features, the Mixin Network is aiming to be more than just another public blockchain. It’s also aiming to be a solution that enhances the entire blockchain ecosystem.

In order to achieve cross chain functionality and scalability, Mixin has developed a network of distributed ledgers that function under a directed acyclic graph design (or DAG).

A DAG is a uniquely designed mechanism for distributed ledger nodes to achieve consensus. Unlike blockchains, which relay information in a linear pattern (from one block to the next), a DAG uses a ‘gossip protocol’ to disperse information randomly between multiple nodes, allowing consensus on transactions to be achieved faster.

The Mixin network consists of many supporting ledgers called ‘domains’ and ‘domain extensions’. At the center of these domain ledgers is the ‘Kernel’, which is the core ledger.

Each type of ledger serves a unique purpose within the Mixin Network:

For Bitcoin, Ethereum, and other blockchain assets to connect to the Mixin kernel, they have to utilize the Mixin Domain.

As previously described, the Mixin Domain is essentially a bridge that uses system calls to communicate between the asset and the Kernel.

If for example, a user wants to send funds from their ETH wallet to the Mixin network, the domain will create a transaction to the Mixin public key, and the Mixin kernel will verify the ETH transaction. 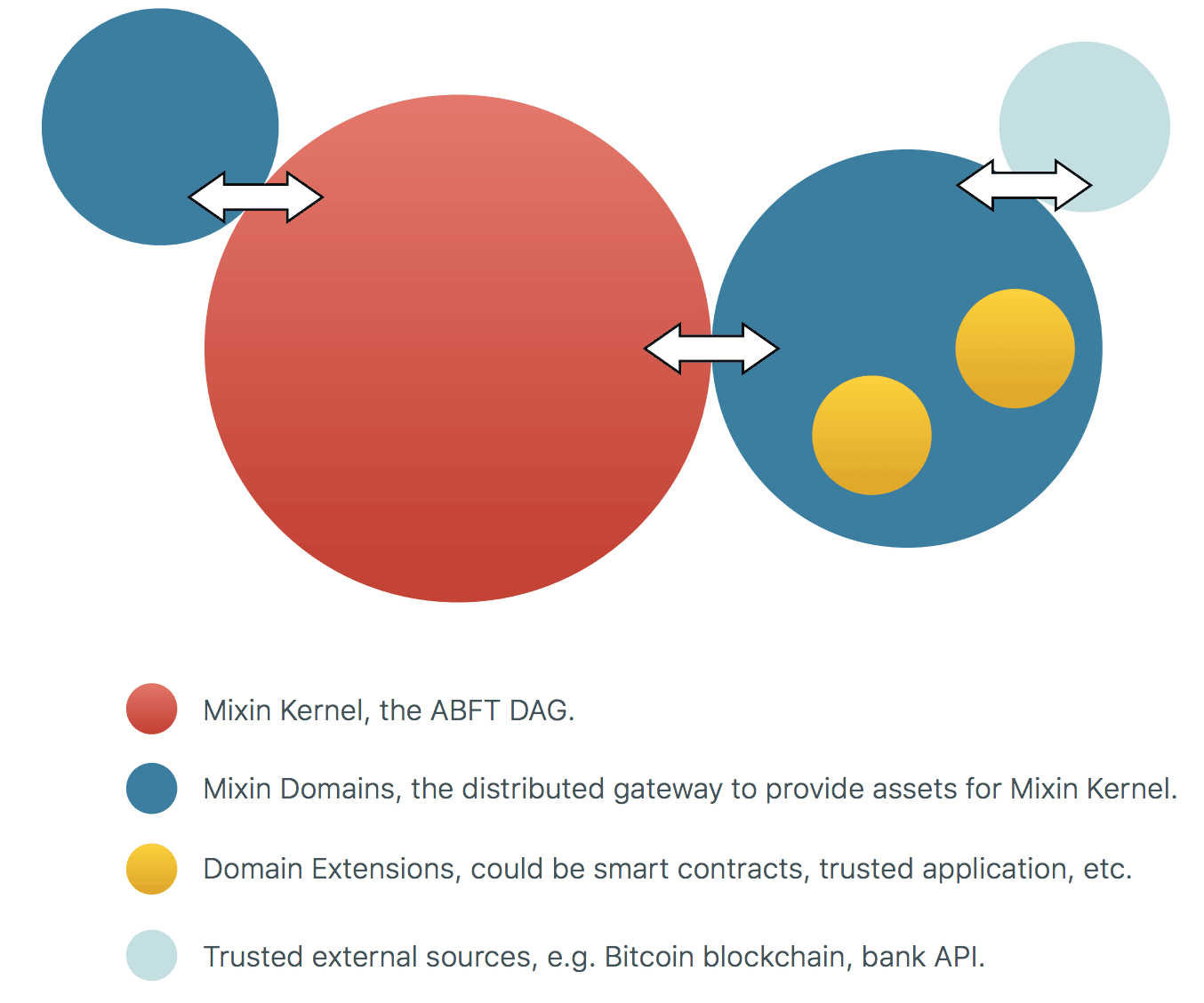 For privacy, the Mixin kernel uses a 1-time key generation algorithm, which allows the system to generate a ‘ghost address’ that can be discarded after every transaction a user makes.

The Mixin domain extension facilitates the creation of smart contracts from a user’s laptop, iPhone or another type of computational unit. These smart contracts will be verifiable by the Mixin Kernel and designed to be more robust than those currently offered on the Ethereum blockchain.

The base structure provided by the Mixin Kernel and supporting domain ledgers enables the Mixin Network to build a scalable and highly secure messenger application. On the Mixin messenger app, users make lightning-fast peer-to-peer crypto transfers to contacts both inside and outside of the network. The app, featuring a digital wallet, is available in the Google or Apple store. 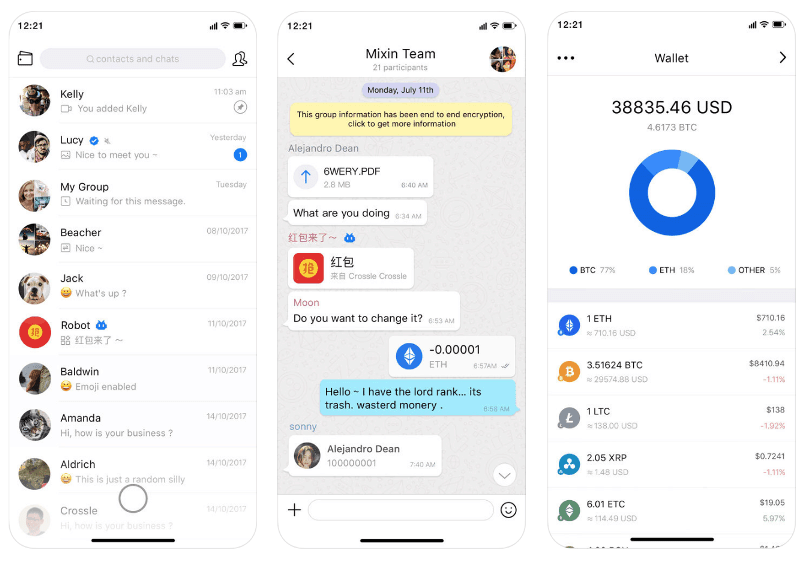 The Mixin messenger app is further enhanced with a series of bots that automate important functions and provide additional information and entertainment. The Bots are capable of automating Transactions, providing, News and Information, games, and AI chat functionality.

XIN tokens are the main token used in the network. Like Bitcoin and Ethereum, the token is paid to those who support the network by validating transactions.

The Mixin Network also connects to different Dapps using API calls. These Dapps pay the network in XIN tokens based on the amount of resources the Dapp consumes. Currently, Mixin welcomes more developers to build Dapps in the Mixin ecosystems.

The Mixin Network team consists of experienced developers who have worked in the blockchain and tech space for many years, and have produced a variety of unique multimedia apps. Overall the team has 20 members who are based in China and Japan.

Overall, the Mixin Network is an ambitious project that is aiming to solve the fundamental problem of blockchain scalability and cross chain functionality. Despite operating in a competitive space, the company’s multilayered infrastructure provides unique value to everyone from developers to traders and casual cryptocurrency users.

If their developer community continues to expand and the company builds strategic partnerships, I believe the Mixin Network will play a significant role in crypto’s journey to mainstream adoption.

Christmas Greed In Traditional Markets And Fear In Crypto: Chances For Reversal?

Steve Bannon: ‘90% of ICOs Have Been a Disaster’ Bitcoin Price Has Bottomed, According to Barry Silbert
Scroll to top