2018 has been a big year for the stablecoins, as many alternatives to Tether have begun to launch and are now available on most popular exchanges.

These include TrueUSD, USDcoin, Paxos, Gemini’s GUSD and more. Each new coin has emerged with an aim to increase the level of transparency in the stable coin market, something that Tether has been notorious for failing to provide over the years.

As a result of this space, which is becoming more crowded, Tether’s dominance over the market has predictable weakened, from 96% before October 2018, to 73% in December. 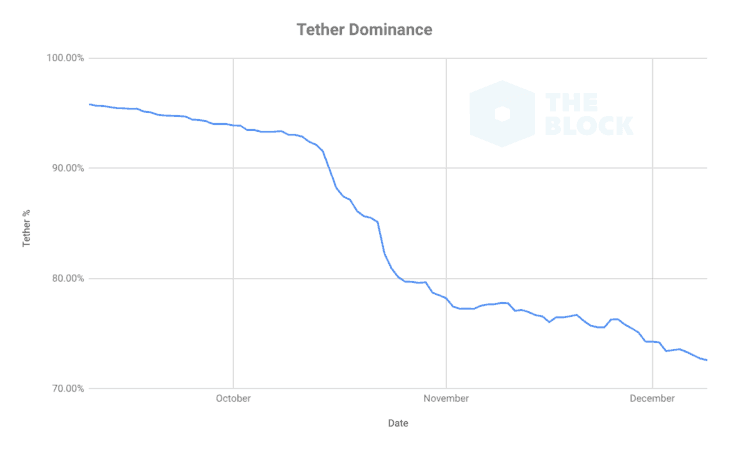 TrueUSD, USD Coin and Paxos now all have a circulating supply north of $170 million while Gemini is trailing with nearly $85 million.

Although the idea of multiple stable coin options may seem redundant, they actually serve an important market function by reducing the overall risk of one stable coin failing to stay pegged to the USD. Smart investors who want to keep their crypto pegged to the USD will most likely divide it amongst 3 or 4 stablecoins to manage the risk of one coin experiencing volatility for whatever reason.

The need for alternative stable coins was made very apparent when Tether experienced a 2.1% decline to the US dollar, causing rival stable coin TrueUSD to experience a 4% increase when paired with Tether. It was most likely not a coincidence that this was also the time when Tethers dominance over the stable coin market dropped from 96% to 73%.

What’s also very interesting to observe about Stable coins is the positions that each hold on the crypto’s Coinmarketcap list:

This means that we have a combined market cap of $2.46 billion for the top 5 stable coins, which places the total value of these 5 stablecoins at #4 behind only Ethereum, XRP and Bitcoin:

Since all of these stable coins are pegged 1-to-1 with the US dollar,  this data is an indicator proving the demand for US dollars among crypto investors. The bear market is likely a significant contributing factor to the rise of stable coins, and we can anticipate that a bull run would push their combined market cap a lot further down as investors would feel more confident in placing their funds back in cryptocurrencies that are experiencing upward volatility.

The post The Stable Coins Revolution: Tether’s Dominance Had Dropped To a Three Years Low  appeared first on CryptoPotato.

JP Morgan: Put 1% In Bitcoin as a Hedge as Demand is ‘Massively Outstripping’ Supply
Kraken Acquires Crypto Facilities Futures For $100M: What Are Crypto Futures and What Can We Learn About Kraken and The Crypto Ecosystem?
Bitcoin Price Analysis: BTC Facing Huge Resistance Following Recovery, Will $18K Hold?
Ripple Records New Monthly Low Against Bitcoin, Opportunity Or Falling Knife? XRP Price Analysis & Overview
Satoshi-Era BTC Worth $11.3 Million Moved for the First Time in 10 Years
XRP Reaching Decision Point As Bitcoin Surges To $9,500, Where To Next? Ripple Price Analysis
The Duke And Duchess Of Sussex Harry And Meghan Used As Bait In A Bitcoin Scam
Binance Rolls Out Leveraged Tokens Barely Two Months After Delisting Similar Tokens By FTX