A lot of people have been sounding the alarm about China’s credit situation.

Many think tanks, academics, government officials, and even the (now outgoing) head of the People’s Bank of China, Zhou Xiaochuan, have warned of the risks of the rising debt burden in the Chiense economy.

And despite all the warnings, China’s debt-to-GDP ratio has continued to grow.

So why does it matter?

China’s growing debt burden is a concern not just for China, but for the rest of the world as well. A debt-infused crisis in China would reverberate loudly around the world’s economy and its financial markets. Few investors would be unaffected by a financial crisis in China.

So how China deals with its debt mountain is of great importance to everyone.

Real estate is at the core

Property development is a big part of China’s rising debt burden. Households in China are not overly leveraged compared with most countries in the west. But household debt is rising, and mostly in the form of housing debt.

Debt owed by real estate developers is the biggest concern in China’s property markets right now. Many small local developers around China are highly leveraged. Media reports suggest that China’s property developers owe banks more than US$400 billion, but the total debt figure is likely to be much higher.  But many of these smaller developers have other operations as their main business, and probably should not be in the real estate business anyway.

A few larger listed companies are also facing large debt piles. For example, Evergrande (listed in Hong Kong) is a large property developer, but is more known these days for its debt mountain. Net debt in 2016 amounted to more than six times the company’s equity. But for the great majority of larger listed companies, debt is under control.

And many controls are being implemented in the housing markets aimed at keeping a lid on housing prices and debt burdens. For example, the maximum mortgage that a family can take out is limited to 70 percent of house value for first-time home buyers. This maximum is 50 percent or even less for second homes. Developers are banned from funding buyers with top-up loans.

Banks are also being forced to curb lending to home buyers. No lending is allowed at all to buyers who are not “locally qualified”. For example, buyers must have been paying local taxes or local pension plans for at least one year (and in some cities five years) in order to qualify for bank financing for a home.

These widespread control measures are working. Prices in many cities have now slowed and the national average growth for home prices is slowing down. It has not yet become negative, where prices today are lower than a year ago, but could slide into this territory in the coming year or so. This would be the fourth down cycle in China’s housing market since the onset of the global financial crisis in 2008.

So far, most listed developers are recording record pre-sales of properties under construction, but many smaller developers are seeing slowing sales or falling out of the market. The larger Hong Kong listed China property developers are gaining market share and to some extent benefitting from these tighter conditions that are affecting smaller players. 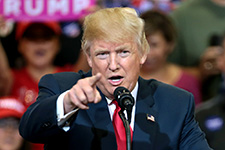 Trump vs. China: Make 10x from the smackdown
Donald Trump and China are about to go to battle… and prices of a small group of “hot commodities” will go up 1000%. Find how to position yourself before the gloves come off
LEARN MORE HERE.

Success in controlling home prices has been a mixed bag, but the issue is a difficult line to walk. Construction and real estate is a very large part of the economy (as much as 18-20 percent if direct and secondary effects are taken together). If the real estate sector slows, then the overall economy will also slow. Policy makers want to maintain growth at roughly today’s levels. And policies curbing the real estate sector threaten to undermine that growth objective.

Policy makers also understand that there is a big need for housing as new middle class people flood to the cities. But more importantly, the need for affordable housing is becoming much more central to policy.

So China will be under pressure to boost production of lower cost, affordable housing, and more rental housing.

I expect to see government schemes that involve the private sector in ventures to produce more affordable and more rental housing. We are already seeing companies starting to increase their commitment to lower cost rental housing.

For example, China Vanke, one of the largest property companies in China is growing its residential rental portfolio, as is real estate giant Poly China. The listed China property company whose board I sit on is doing likewise. I recently visited some of their properties targeted for low- to middle-income rentals just recently. And a company called Ziroom has around 400,000 residential units in its rental portfolio, more than any other company around the world that I can think of. It’s apartments in four major cities in China now house more than a million people.

So I expect to see housing construction rise, not fall in the next couple of years. But much will be at the lower-end cost of the market.

The rising debt has brought with it rising non-performing loans (NPLs) and the risk of potential major problems for the country’s banking system.

NPLs at banks are almost certainly understated, but even reported figures show some signs of improvement in debt repayment. Still, the real story is not transparent.

In aggregate, the debt-to-GDP ratio is still rising. Although debt in some isolated pockets it is coming down, it is rising in others.

Considerable new regulatory oversight has been applied to the shadow banking sectors. Many structures that used bank-based funding to on-lend to corporate borrowers and households have been reined in and banks have been forced to take such financing back on to their balance sheets. This reduces their incentive and ability to undertake this kind of financing

The markets have found favour with such policies, which should reduce risk in the financial sector.

That’s why fear of widespread bank failures has dissipated in recent months. This is reflected in rising share prices of the main Chinese banks listed in Hong Kong.

While the rise in debt in cause for concern, it is not cause for panic

So, as I’ve said before, rising debt in China is not a reason to stay away from Chinese investments. The issue of China’s corporate debt burden is well documented and well understood by the government. And whilst non-performing loans at Chinese banks are likely higher than reported, these banks are still extremely well capitalised.

The post The truth behind China’s credit “crisis” appeared first on Stansberry Churchouse.

Here’s how to tell if property prices are crazy – or not What happens when the next recession hits?
Scroll to top