Crypto Blog
You are here: Home / Crypto Blog / Bitcoin / The Wisdom and Pain of the Long-Term Investor 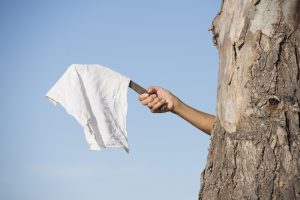 But I’m not about to change my stance on cryptocurrencies or, for that matter, last year’s speculative bubble. This is what I said then…

I have no problem with speculation, even if it causes prices to go too high.

In a bull market, when prices get a bit frothy, we ask: What is too high?

And in a bear market, like the current one, we ask: What is too low?

Of course, we can talk all day about how the market should act… where prices should go…

But the market doesn’t take polls. It goes wherever it wants to.

And right now it wants to go down… and investors are walking on eggshells.

I’ve heard the dot-com crash invoked many times by many people. And, as prices lurch from low to low, no doubt it’s going to be brought up more often.

I get it. Dot-com companies ushered in a technology that was every bit as audacious and transformative as crypto is supposed to be.

The parallels aren’t exact, though. The dot-com era didn’t have an ideology. (Crypto wants to do away with fiat money and blow up the cozy relationship between big government and big banks.)

It did have techies who strongly believed in the feasibility of the technology they were developing. So, even here, the paths of dot-com and crypto don’t diverge a whole lot.

I not only witnessed the dot-com period, but participated in it as an entrepreneur. I joined a dot-com company in Pennsylvania as its vice president of marketing. We were going to create an online marketplace for petrochemical buyers and sellers. We had done our research. We knew the market was huge and ridiculously inefficient. We were going to start in the U.S. and expand globally.

The dot-com crash happened less than a year after we went live. Just like that, our capital sources dried up. We hung on a little longer before ceasing operations.

Looking back, it would have been an uphill battle in any case. Like most dot-com era companies, we were dependent on technology and an internet infrastructure that was still a few years away from prime time.

Companies also fell by the wayside because they had exaggerated their market… or they didn’t address real needs with real solutions… or their solutions were too costly to make a profit.

Dot-com investors finally ran out of patience, and who could blame them?

The next generation of internet companies did much better. The technology and infrastructure had matured in the intervening years… business models were tweaked… and, of course, the universe of internet users exploded as they graduated from dial-up to broadband and from computers to cheaper laptops to still cheaper and more ubiquitous smartphones.

Yet some institutional and individual investors stayed through the crash and waited for the industry to come into its own. How did they fare?

It took a while. But they were rewarded with some pretty big winners – Google, Amazon, Facebook, Twitter, Alibaba… plus hundreds of others that formed the core of the new internet age.

Great things are expected from the crypto world. But there’s been no killer product or application to capture the imagination of everyday investors.

And now they’re getting discouraged. 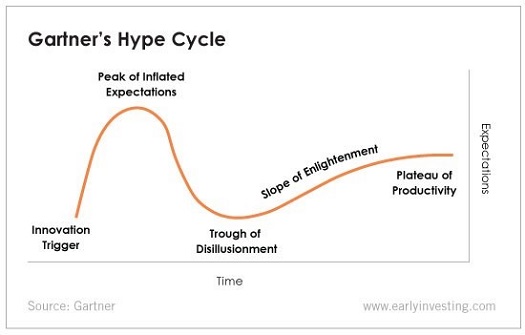 I told you at the time that we were halfway down the slope from the Peak of Inflated Expectations to the Trough of Disillusionment.

Maybe I was a little off. Maybe it was more than halfway. But I still think the Trough of Disillusionment lies ahead of us… and that means only one thing.

We have NOT reached full capitulation yet.

That happens only when all the short-term speculators give up on prices ever bouncing back and sell their shares at a loss.

We will continue to see capitulation play out. It has a ways to go, which is not good news for prices. They’ll have a tough time rebounding. Even if prices do go up some, it will probably encourage more selling than buying, with short-term speculators eager to exit the market at slightly better prices.

I realize this is not what you want to hear. As a crypto investor myself, I really do feel your pain.

So let me tell you what I tell myself…

Think long term. You’re so early with these investments that those crypto companies that hit their marks will easily drive value up and past previous highs.

This is particularly true if you invest like Adam Sharp and I do. We look at the factors that drive fundamental value, such as the experience and skill set of the company’s team, the potential to scale technology and the size of the use cases.

As we approach the Trough of Disillusionment, it’s no surprise that the narrative and sentiment has turned negative. Your investment risk – not insignificant to begin with – seems much bigger than it is.

But taking a risk doesn’t have to be the same as taking a loss. Let others succumb to panic-selling. If you’re a serious investor with a long-term outlook, now is the time to exercise patience while holding on to your crypto assets.

The post The Wisdom and Pain of the Long-Term Investor appeared first on Early Investing.

Cryptocurrencies, Internet Both Grappling With Regulation