Crypto Blog
You are here: Home / Crypto Blog / Bitcoin / This Was Tezos’ Week While Bitcoin Consolidates: The Weekly Market Upr...

The last week hasn’t been full of a lot of action with Bitcoin’s price. In fact, the cryptocurrency traded sideways within a fairly tight range between $7,600 and $7,100. However, it managed to retain its market dominance, as it accounts for about 66.6% of the entire capitalization.

This also means that altcoins failed to break any new grounds. In fact, almost all of them were also trading sideways or experienced slight losses. One which stands out, however, is Tezos. Just like the week before that, during the last seven days, XTZ is once again in the green, up more than 35% over the period. In fact, Tezos managed to become the 10th largest cryptocurrency.

The week was fairly eventful in terms of news. Legislators across the world continue their efforts to figure out how to best define and regulate cryptocurrencies. The US IRS has added a new form that requests more information on Bitcoin holders, while Ukraine seems ready to make cryptocurrencies an official means of payment.

Of course, there was also tension, showcasing that there’s still time needed for the market to mature. MATIC, one of the popular projects, saw its native token drop 70% in a matter of hours. Needless to say, things of the kind are a lot less often and harder to happen within regulated traditional markets.

Bitcoin’s network continues to improve as well. Recent reports showed, however, that 66% of its entire hashrate pertains to miners in china. A closer look reveals that there is no single entity that is anywhere near to controlling 51% of it, meaning that it manages to achieve its true purpose – proper decentralization.

In conclusion, the week wasn’t very intense in terms of price action, but the overall developments are evident. It’s interesting to see how December 2019 will end and what the market has in store for us going forward in 2020. 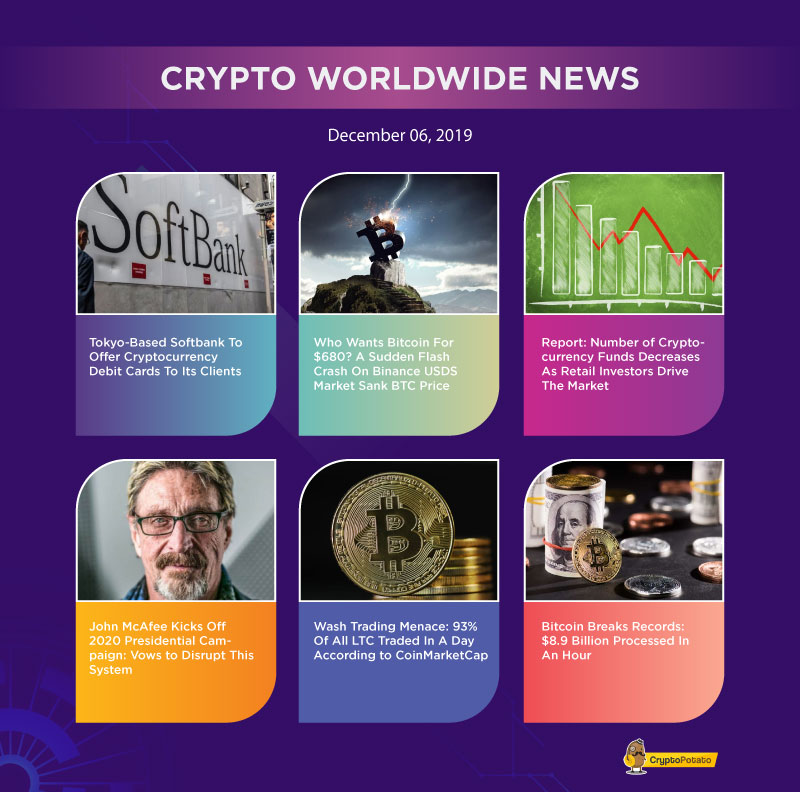 Historic Time For Bitcoin Accumulation? Experts Insist It’s The First Phase Of Another Bitcoin Bull Market. While the current sentiment could be seen as a bit bearish, experts have weighed in, saying that the market is currently at the beginning of a bull period. Moreover, some hold that this is a great opportunity to start accumulating Bitcoin, as institutional interest is mounting.

66% Of Bitcoin’s Total Hashrate Is Controlled By China: Reuters Reports. 66% fo the entire hashrate of Bitcoin’s network pertains to miners located in China. However, the network is particularly decentralized as there are no organizations that are even close to controlling over 50% of the hashrate.

Matic Crashes 70% Overnight Following Panic Selling According to CZ. The native token of MATIC Network crashed with 70% in a matter of hours. The token lost a lot of its value because of panic selling in large volumes, according to the CEO of Binance, Changpeng Zhao. The project’s chief explained that there is absolutely no involvement on behalf of the team, which was also confirmed by CZ.

Ukraine Set To Legalize Cryptocurrencies As Means Of Payment And Investment. The legislators of Ukraine have adopted an amended draft that seeks to introduce cryptocurrencies as a legal means of payment and investment in the country. This is supposedly intended to work in accordance with the global standard set forth by the FATF.

The US IRS Wants To Know How You Got Your Bitcoin. The Internal Revenue Service of the US has issued a new draft form which aims to receive essential information about the exchange, sale, and acquisition of Bitcoin and other cryptocurrencies. The move adds up to previous efforts of the authority to acquire more information on Bitcoin owners.

Crypto Community Crowns Tezos (XTZ) As The New “Ethereum of 2017”. The recent surges of Tezos (XTZ) have undoubtedly started a debate within the cryptocurrency community. What is more, a lot of proponents are already comparing it to one of the best performing digital assets of 2017 – Ethereum (ETH).

This week we have a chart analysis of Bitcoin, Ethereum, Ripple, Tezos, and Tron – click here for the full price analysis.

The post This Was Tezos’ Week While Bitcoin Consolidates: The Weekly Market Uprate appeared first on CryptoPotato.

Bank of England Governor: Prepare to Lose Money if You Invest in Bitcoin

Bitcoin Persists: Outlives The First Website To Declare Its Death 10 Years Ago

Chainlink For $0.01? LINK Flash-Crashed By 99% On Binance Exchange

Bitmain Saga Over: Jihan Wu Steps Down as CEO