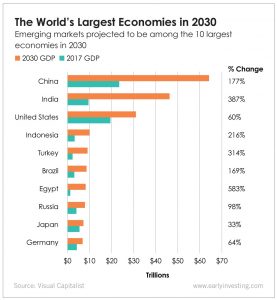 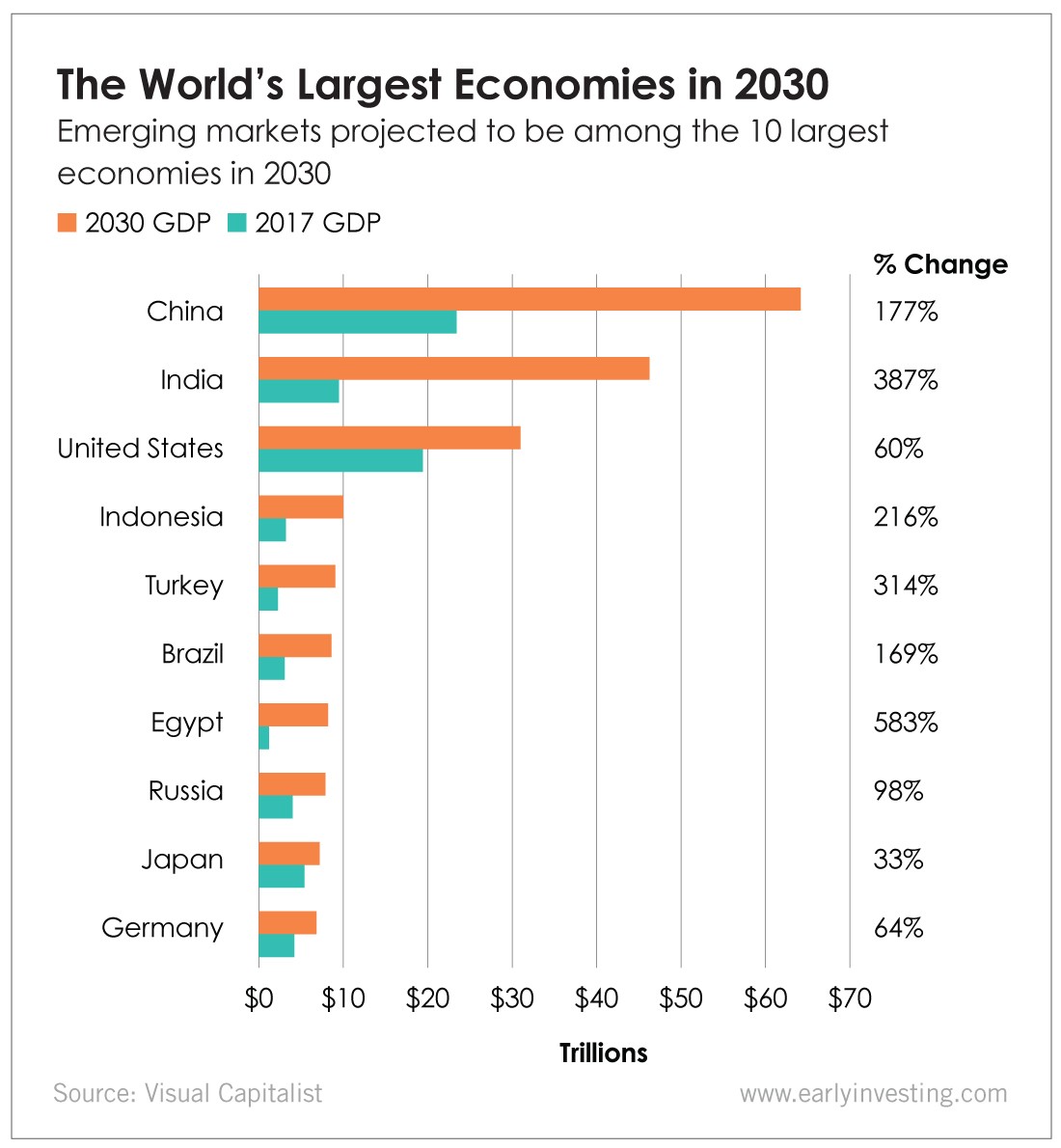 Today’s chart imagines the world economy 11 years from now. And emerging markets (EMs) are the stars of the show.

A recent forecast from Standard Chartered, a multinational bank based in London, shows that several developing economies are on track to become the world’s largest economies by 2030. China and India lead the pack in the 2030 forecast with projected GDPs of $64.2 trillion and $46.3 trillion, respectively. The U.S. holds the third spot, followed by Indonesia ($10.1 trillion) Turkey ($9.1 trillion) and Brazil ($8.6 trillion).

This is a giant flashing neon sign that investors should get into EMs if they haven’t already. As our own Adam Sharp has written, U.S. stocks are expensive and overvalued. The Fed has been boosting U.S. stocks with low interest rates, but the tactic is unsustainable in the long run. Adam explains:

Clearly the Fed goosed stocks higher with these low rates. Now it wants the party to continue and is likely to cut rates down to zero or near to it (eventually I think it’ll go negative). But how long can the stock rally continue? Will the economy thrive with low rates and no return for savers? I have my doubts, so I’m limiting my exposure to U.S. stocks…

Most American investors have 90% of their portfolios in U.S. stocks. I’d guess their average exposure to EMs is under 5%. And everybody’s still running the traditional investment playbook because it’s been working incredibly well. But I believe the time has come to throw out the traditional playbook.

The S&P 500 is not the place to be for the next 10 years. U.S. stock markets have had an incredible run, but I believe it’s time to start thinking about alternatives like EMs, disruptive startups, cannabis, crypto, and gold and silver.

So if you’ve got the majority of your portfolio in U.S. stocks and have limited exposure to EMs, consider diversifying. Stocks in China, India and the other EMs in today’s chart can all offer big upside for a much cheaper price than their U.S. counterparts.

Plus, public companies aren’t the only thing EMs can offer investors. As Andy Gordon pointed out in our Sunday Mailbag, some of the biggest and most profitable startups are born in countries like China and India. They’ve got massive populations of young people who are keen on adopting the latest technology. And their startups don’t come with a Silicon Valley price tag.

How Startups Can Help Protect Our Elections