December is almost over, and it’s safe to say that it has been action-packed. Over the past week, Bitcoin’s price went on a rollercoaster, dropping to a low of around $6,500 only to correct to approximately $7,200 where it currently trades, leaving many to question whether the bottom was already in. Looking at the bigger picture, however, one year ago, Bitcoin was trading at around $3,122, which means that it has managed to more than double its value.

It’s worth noting that while the price was jumping up and down throughout the entire week, Bitcoin’s dominance has been surging. In the last seven days, it’s up almost 2%, standing at 68.3%. This means that altcoins have been struggling to claim any new grounds, despite the turbulent price action.

Looking at altcoins, the week has been relatively disappointing. Most of them are charting decreases upwards of 5% against both Bitcoin and the USD. Of course, as it’s almost always the case, Bitcoin’s recovery also helped altcoins, and they did manage to patch up some of the losses from the beginning of the week.

The market continues its development, and exciting news came from the European Union. New and strict regulations will take effect in January 2020, which would require cryptocurrency businesses to implement more thorough KYC and AML check-ups. Fidelity Digital Assets, one of the world’s largest asset managers, is also set to expand its crypto services in Europe.

In retrospect, the week was eventful in terms of both price action and news. As we enter the week of Christmas, it’s interesting to see whether Santa will come early or will it be a no-show. 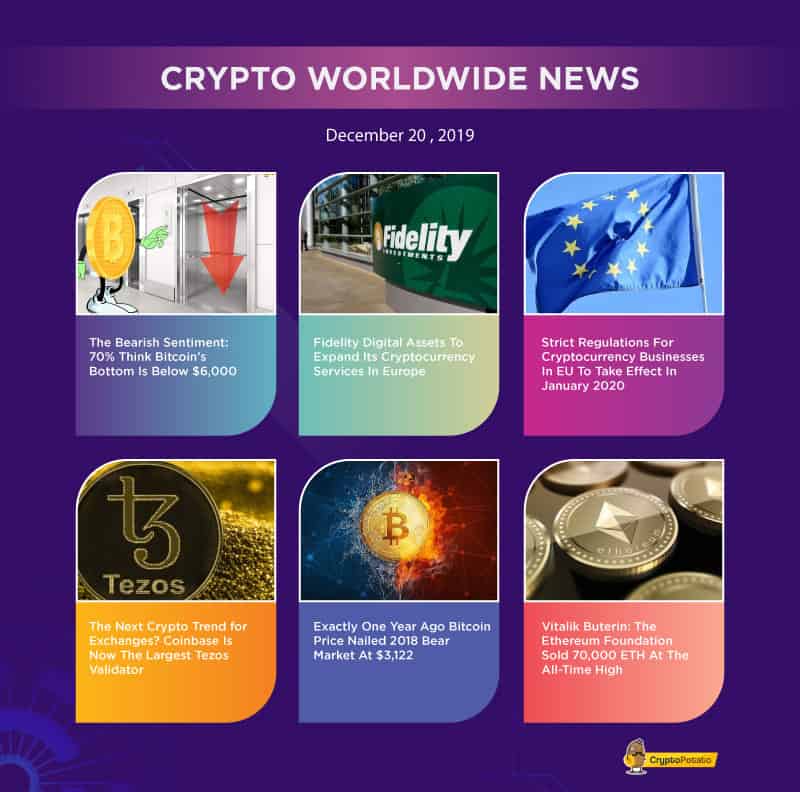 The Bearish Sentiment: 70% Think Bitcoin’s Bottom Is Below $6,000. The beginning of the week was hard for Bitcoin, as the price plummeted to around $6,500. One prominent analyst took it to Twitter to ask where do people think Bitcoin will bottom. The majority said that it would be below $6,000.

Fidelity Digital Assets To Expand Its Cryptocurrency Services In Europe. One of the largest asset managers in the world, Fidelity, is expanding its cryptocurrency services in Europe. The news is positive in terms of the institutional investment that’s flowing into the market. This will allow larger investors to enjoy compliant and institutional-grade storage solutions for Bitcoin.

Strict Regulations For Cryptocurrency Businesses In EU To Take Effect In January 2020. Cryptocurrency companies and services that are based in the Europen Union now have less than a month to become compliant with a new set of regulations. After January 10th, the Fifth Anti-Money Laundering Directive (5AMLD) will be in effect, requiring thorough KYC/AML procedures.

The Next Crypto Trend For Exchanges? Coinbase Is Now The Largest Tezos Validator. Per a recent report, Coinbase, the biggest US-based cryptocurrency exchange, is the largest validator for Tezos (XTZ). Interestingly enough, this puts a new potential trend on the block, and people wonder of validation from exchanges will become a hotter topic in the following months.

Exactly One Year Ago, Bitcoin Price Nailed 2018 Bear Market At $3,122. Time flies when it comes to Bitcoin’s price. Just a year ago, the world’s largest cryptocurrency found its 2018 bottom at $3,122. Now, after a turbulent 2019, Bitcoin managed to more than double its value and currently trades at around $7,200.

Vitalik Buterin: The Ethereum Foundation Sold 70,000 ETH At The All-Time High. The co-founder of the second-largest cryptocurrency by means of total market capitalization admitted that the Ethereum Foundation managed to sell 70,000 ETH when it was at its all-time high. Given its price back then, the ETH that was sold netted the foundation around $98 million.

This week we have a chart analysis of Bitcoin, Ethereum, Ripple, Litecoin, and Binance Coin – click here for the full price analysis.