Opinion – In recent months, the USA and Chinese relations have become less friendly as both countries are engaged in a fierce trade war that has resulted in expensive tariffs being placed on Chinese imported goods to the US. We have analyzed how this trade war could be beneficial for Bitcoins prices, however, what is also interesting is how the US Government could become less open to Bitcoin adoption in the US due to China’s concentration of mining pools. Instead, the US Government, currently operating under President Trump’s ‘America First’ policy, may push support towards a cryptocurrency like Ripple in an attempt to compete with the Chinese dominant Bitcoin.

Currently, about 81% of Bitcoin mining operations are located in China. Antpool and BTC.com (2 mining pools owned by Chinese company Bitmain) account for 32% of all the processing power on the global Bitcoin network. 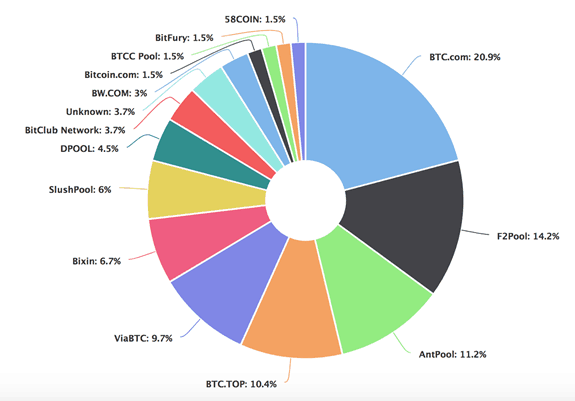 This concentration of Bitcoin mining means that the majority of Bitcoin traded around the world at one point or another was originated from Chinese minors. This further increases the influence of Bitcoin supply and demand from Chinese investors Government policymakers.

By contrast, Ripple is an American tech company based in San Francisco. The company is best known for developing its currency, XRP, which is supposed to function as an international payment solution for banks to transfer funds across a shared ledger on the Ripple blockchain.

Ripple for the Americans

XRP is currently number 3 on the list of largest cryptocurrencies by market cap, behind Ethereum and Bitcoin. In the lead up to Ripples Swell conference, XRP price gained an impressive 100% boost, briefly placing it ahead of Ethereum on the cryptocurrency market cap list.

Many within the crypto space have expressed concerns over XRP’s centralization. Unlike Bitcoin, XRP tokens are produced through a traditional cryptocurrency mining process. Instead, the company minted as much as 100 billion XRP tokens, and Ripple Labs still hold about 60% of those tokens.

Nevertheless, Ripple labs recently revealed that the Trump administration had expressed interest in adopting XRP as a way to offset China’s Bitcoin dominance.

It makes sense that the US administration would take a liking to XRP. After all, a centralized cryptocurrency is a natural fit for a centralized Government.

“When you look at XRP, there is no mining, so from a foreign-control aspect or an environmental aspect, XRP is a very different beast. And in conversations we’ve had with the administration, they seem to get that and think that might matter.”

With Ethereum and Bitcoin being operated by decentralized mining pools, XRP is a much better option for the US government to adopt and potentially exercise more control than the Chinese government ever could with Bitcoin.

Ultimately, as 2 of the world’s most dominant nations fiercely compete on the global stage, we can be sure that they are seeking out every advantage. As the crypto market continues to grow, Government control over digital assets would be a huge advantage, and although China currently harbors a large concentration of Bitcoin mining pools, that does not give the country the power to influence Bitcoin in the same way that the US Government could affect a more centralized cryptocurrency like XRP.

From the perspective of the average cryptocurrency user, Bitcoin adoption is the way forward to more freedom and financial independence. However, for the US Government, XRP adoption could be the perfect solution to undermine Chinese influence over the American and International monetary system.

Fed Chair: Crypto Has No Intrinsic Value, Not a Store of Value, Great for Money Laundering

Bitcoin Is Not Banned, The Reserve Bank Of India Clarifies

How Catalonia Powers up Independence with Blockchain Technology