Crypto Blog
You are here: Home / Crypto Blog / Bitcoin / What Cannabis Businesses Need to Learn From Curaleaf and Icarus 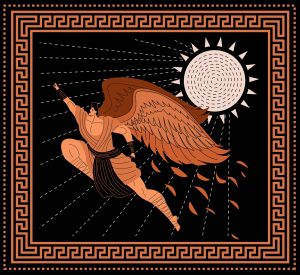 As a child, I was obsessed with Greek mythology. I spent endless summers reading about the Greek gods. Zeus, Athena, Hercules, Poseidon – I couldn’t get enough of them!

One of my favorite stories from Greek mythology is the tale of Icarus. Icarus was the son of Daedalus. Daedalus was a famed master craftsman in Greece. And at the request (read: order) of Crete’s King Minos, Daedalus built a labyrinth to imprison a minotaur (half-man, half-bull). But because Minos didn’t want anyone to know the secret of the labyrinth, he imprisoned Daedalus and Icarus.

So Daedalus did what inventors do. He figured out a way to escape. He built wings for himself and his son out of wax and feathers. Then Daedalus told his son not to fly close to the sea because water would get on the wings and weigh him down. And not to fly too close to the sun because the wax would melt and Icarus would plunge to his grave.

But Icarus couldn’t help himself. When he and his father escaped, the joy of flying and freedom overwhelmed him. He soared toward the sun, despite his father’s warnings. And he died after the sun melted the wax and sent him tumbling into the sea.

To this day, this is one of my favorite stories. I particularly like it because there are so many lessons businesses can draw from it.

When you work in a nascent, highly regulated industry like cannabis, flying too close to the sun is one of the biggest dangers.

It’s something the online poker crowd learned the hard way. For years, PokerStars and Full Tilt Poker operated in the U.S. without a license. And they signed up thousands of poker players to their services, even though online poker’s legality in the U.S. was murky at best.

The Department of Justice probably would have left PokerStars and Full Tilt alone if the sites had maintained a low profile. But they started buying commercials on TV. They got players to wear patches on their shirts and hats at the World Series of Poker. They produced TV shows. They flew too close to the sun and basically dared the DOJ to shut down their U.S. operations (both were global companies). And the DOJ did just that in 2011. Full Tilt was so financially devastated that PokerStars ended up buying it out.

Fantasy sports were hot. And FanDuel and DraftKings were the two biggest players in the space. But then they decided to fly too close to the sun and flood the airwaves with commercials. At one point, DraftKings was averaging a commercial every 90 seconds. There was no escaping them.

So the once under-the-radar daily fantasy sports business caught the eye of regulators. And the state of New York (temporarily) shut it down.

Flying too close to the sun is something the cannabis industry needs to worry about. Consider Curaleaf. It’s already been burned.

The Food and Drug Administration (FDA) has been charged with regulating CBDs. It’s a position it doesn’t really want to be in. So as long as cannabis and hemp companies don’t make outrageous health claims and stay off the FDA’s radar, the agency is unlikely to take action.

Curaleaf learned that lesson the hard way. Earlier this year, Curaleaf inked a deal to sell CBD products at 800 CVS locations. That caught the eye of the FDA. And just last month, the FDA sent Curaleaf a warning letter telling it not to make “unsubstantiated [medical] claims” while selling its CBD products.

Curaleaf flew too close to the sun. And it suffered. Curaleaf shares fell more than 7%. And CVS pulled the products named in the FDA letter off its shelves.

Don’t fly too close to the sun. Keep your head down. And stay off the FDA’s radar.

The post What Cannabis Businesses Need to Learn From Curaleaf and Icarus appeared first on Early Investing.

Hardware Startups Have a Secret Strength

How to Hedge Against Stock Market Turmoil

Virgin Galactic Soars for… No Reason?

Fiat Currencies on ‘Cliff of Death’ While Recessionary Pressures Grow Bitcoin Price On Way To $250,000 By Q1 2023: Tim Draper
Scroll to top