Crypto Blog
You are here: Home / Crypto Blog / Uncategorized / What Is Ark? | A Guide to the All-in-One Blockchain Ecosystem

Ark is a decentralized ecosystem designed to increase user adoption of blockchain technology. The Ark Crew, the self-named development team, has outlined clearly in their whitepaper that they plan on bringing blockchain to the masses by building “A Fast Secure Core Technology” with “Practical Services for Real People.”

To put it simply, the Crew is creating a sandbox ecosystem where businesses and other users can create their own blockchain from a clone of Ark in just a few clicks. To make this ecosystem as widely-accessible as possible, they’re focusing heavily on providing a good user experience and incorporating as many other blockchains and coding languages as possible.

In this guide, we’re going to cover:

How Does Ark Work?

The Crew is building several notable features into the ecosystem – all with the unified, underlying goal of making blockchain more accessible to the world:

SmartBridges bridge separate blockchains together through the Ark core platform. Basically, Ark becomes the intermediary between different chains allowing them to communicate with one another and trigger events across chains – something that isn’t currently possible.

Enabling SmartBridges on a chain is as easy as inserting a snippet of code.

Exchanges like Coinbase and Shapeshift may also benefit from SmartBridges. These platforms can use encoded listeners to act as a medium for SmartBridge transactions while still charging their normal transaction fees. You can use push button deployable blockchains to easily fork Ark and create your own project. These forks are ideal for start-ups and come with a suite features out-of-the-box. Even more, the chains you deploy through this feature automatically have SmartBridges equipped.

Ark operates using a Delegated Proof-of-Stake (DPoS) consensus algorithm. Unlike Bitcoin, in which miners secure network transactions, delegates secure the Ark network. There are hundreds of potential delegates, but token holders continuously vote on the 51 that get to be an active, forging delegates.

As a token holder, you’re only allowed to vote for one delegate at a time. The fee to vote/unvote is just 1 ARK with plans to soon decrease this fee to 0.02. So. it’s advantageous to at least vote once for a delegate you support. The more ARK tokens you own, the more powerful your vote.

Reputable delegates have written proposals in which they document how they operate. Many of the popular ones include profit sharing from the rewards they receive when they forge new blocks. If you vote for a delegate with profit sharing, you effectively get dividends over time.

Other delegates run with the intention to fund development projects, giving voters an equity stake, or provide services on applications that may be unprofitable otherwise. With your vote, the choice is entirely your own.

The network was launched with 125 million ARK in the genesis (first) block. Delegates are awarded 2 ARK for each block that they forge, and a block is forged about every 8 seconds. 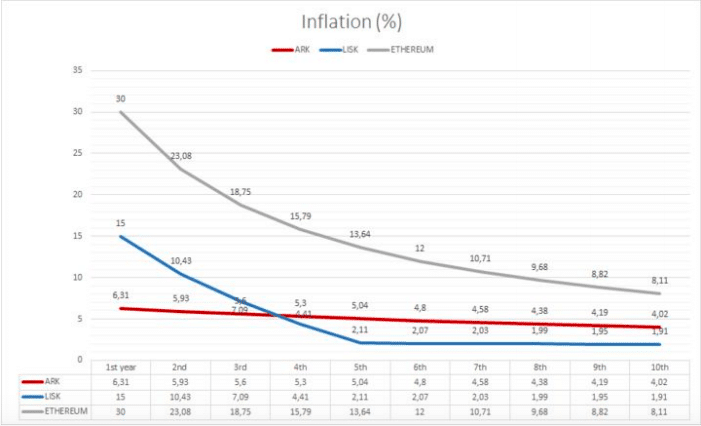 Assuming the 8 second block time doesn’t change, the scheduled inflation of ARK will be 6.31% in the first year, 5.93% in the second year, and will continue to decrease to 4.02% in the tenth year. This is a much less dramatic drop than both Lisk and Ethereum.

The 8-second block time puts Ark on the faster end of transaction times for cryptocurrencies. To put it in comparison, Bitcoin has 10-minute block times, Litecoin’s are 2.5 minutes, and Ethereum transactions typically take 14 seconds.

To send ARK, you originally had to pay a transaction fee of 0.1 ARK. With the release of Core v2, the network utilizes a dynamic fee system.  To register as a delegate, you need to pay 25 ARK and, as mentioned earlier, casting a vote for a delegate currently costs 1 ARK.

All fees are paid to the forging delegate who processes the block containing those fees.

Ark was launched in October 2016 by 27 members spread across the world. With team members located everywhere from California to Bulgaria – the team is truly decentralized. It currently consists of 23 core members.

The Crew has been one of the more active development teams in the crypto community. Since their 2016 beginnings, they’ve accomplished quite a lot. They released the test net version of Ark in December 2016, the first version of the main net in March 2017, and launched the second version of the main net in November 2018. Core v2 lives on an entirely different codebase and includes features such as dynamic fees, increased transactions per second (and transactions per block), and a plugin system among a bunch of other things.

The roadmap still has plenty left as well. Next on the horizon: a payment plugin, push button blockchains, and the Ark virtual machine (for smart contracts).

The Ark infrastructure is modeled heavily on that of three older projects: Bitshares, Crypti, and Lisk. In fact, some of the Ark developers were previously developers on some of those projects. Francois-Xavier (FX) Thoorens, the CTO, was a core developer at Lisk in 2016.

The primary similarity that Ark has with those previous projects is the use of the DPoS consensus algorithm.

Because Ark is intently focused on interoperability, the project is competing with the likes of ICON and Wanchain. However, the team’s approach of using SmartBridges is significantly different than the approaches of these other two.

The price of most cryptocurrencies is driven by product development milestones, strategic partnership announcements, and overall market health. ARK is no different.

ARK has experienced a few major price increases since its lCO in 2016. The first price spike occurred in April 2017 when the development team released a library to provide Java support on the platform. Java is one of the most popular programming languages and the added support most likely pleased numerous Java developers who were previously excluded from using the platform. There have also been smaller price increases with each additional language that was added in 2017.

The largest increase in the ARK token price (in BTC) coincided with two related events. In September 2017, the Crew released a desktop wallet update that fixed many of the bugs spotted by users. This updated also included a partnership with Ledger – one of the most popular and trusted hardware wallets available.

The USD price reached an all-time high of just over $9.00 (~0.000659 BTC) in January 2018 before falling with the rest of the market. The price has spent the remainder of 2018 in a freefall. Even the release of Core v2 has little to no effect on the price. You can currently pick up some ARK for under a dollar.

The overall cryptocurrency market (i.e. Bitcoin) will most likely need to turnaround before ARK sees any positive movements. However, you should still keep your ear to the ground for any development or partnership announcements. Although not as effective in a bear market, these milestones may provide a small bump.

Where to buy ARK

ARK is primarily available on Bittrex and Binance as a trading pair with Bitcoin (BTC). There are other exchanges that support it, but their trade volumes are significantly lower than those two platforms.

To purchase ARK, you should first purchase Bitcoin on a platform like Gemini. Then, transfer your Bitcoin to Bittrex or Binance. From there, you can buy ARK.

Check out the official website to see a full list of the exchanges where the coin is listed.

Where to store ARK

The easiest place to store your ARK is in one of the wallets provided on the project’s site. You have five options:

No matter which wallet you choose, we highly recommend that you vote for a delegate. It only cost 1 ARK (less than $1 at the time of this writing). You can use your vote to support a delegate who’ll payout dividends from their block rewards or one who’s working on a cool project that you want to support.

Ledger wallets also support ARK. With this support, you can store your tokens more securely offline while still being able to use the desktop wallet.

After setting up your wallet, you should vote for a delegate. There’s many to choose from, and they all propose different ideas/payouts for the community. Let’s walk through the process for the desktop wallet.

First, you need to transfer some coins to your wallet. Send the ARK you purchased from an exchange to the public address listed in your wallet.

Send funds to your wallet using your public address.

With at least 1 ARK in your wallet, navigate to the Votes tab. Next, click Add Delegate. In the Add Delegate pop-up, you have the option to choose one of the top 51 forging delegates or enter in another one you’d like to vote for. After selecting a delegate, it should appear on your delegate list. Make sure you check the checkbox next to the delegate, and click Vote.

The last thing you need to do is enter your passphrase and confirm your vote. That’s it. You’re free to remove your vote or vote for a different delegate whenever you want. You’ll still have to pay the 1 ARK fee each time, though.

Ark is steadily working to bring interoperability and usability to the blockchain industry. The Crew realizes that bringing a complex idea like blockchain technology to the public eye has to start with exemplary design.

If they continue to accomplish everything on their audacious roadmap, there’s no doubt that this ecosystem could be one of the most influential catalysts of blockchain technology adoption.

Editor’s Note: This article was updated by Steven Buchko on 12.06.18 to reflect the recent changes of the project.

The post What Is Ark? | A Guide to the All-in-One Blockchain Ecosystem appeared first on CoinCentral.