Last week we witnessed 2 of the most impressive price rallies seen all year. The first came from TLRY, a cannabis stock whose company Tilray created a massive buzz after announcing that the U.S. DEA approved plans for it to import medical marijuana to supply a clinical trial in California. The stock price rallied a staggering 94%, achieving a 40% gain in a single day. In total the stock grew to more than 14 times it’s July IPO price. With $5.9 billion worth of shares trading hands on Wednesday, its volume was second only to Amazon’s $6.1 Billion.

The second impressive price rally came from XRP, a dark horse in the crypto space that received significant hype after the company announced it would be launching its core product Xrapid ‘in the next month or so.’ Although the cryptocurrency market is more used to extreme pump and dumps, many were caught off guard as XRP grew by over 120% in a couple of days, with a 50% gain in just 24 hours.

TLRY and XRP trade in different markets that are very similar yet completely different in a lot of ways. The stock market is highly regulated by centralized governments who impose laws to prevent fraud, insider trading or pump and dump schemes. Some retail investors invest and trade stocks, but a more significant portion of the capital comes from institutional traders and hedge funds.
The crypto market is an unregulated and decentralized space dominated by retail investors. In this space, privacy and autonomy precede regulatory oversight, opening the doors for ‘whales’ to manipulate the markets on a frequent basis.
With these market differences, what seems clear is that no amount of regulations can prevent assets from skyrocketing in price, although their fundamentals indicate that they are overvalued.

The issue of fraud and manipulation in traditional markets and crypto

Meanwhile, many in the crypto space hurl the exact same accusations at the traditional financial markets, citing fraud and manipulation on behalf of the very same centralized bodies who are supposed to regulate the space as the reason why they moved over the crypto. 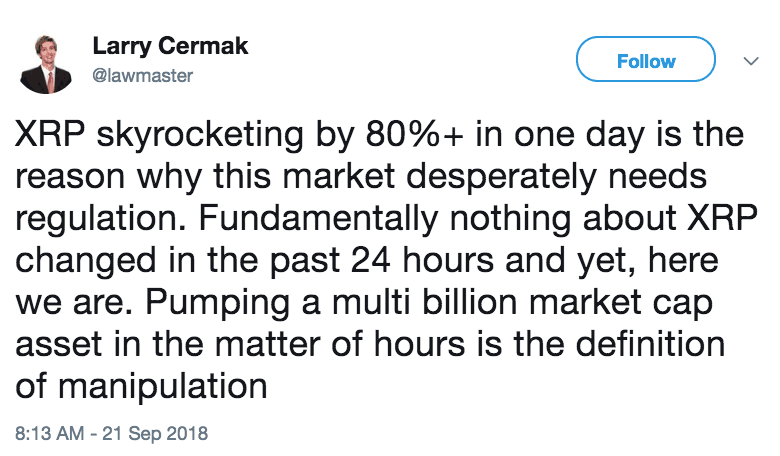 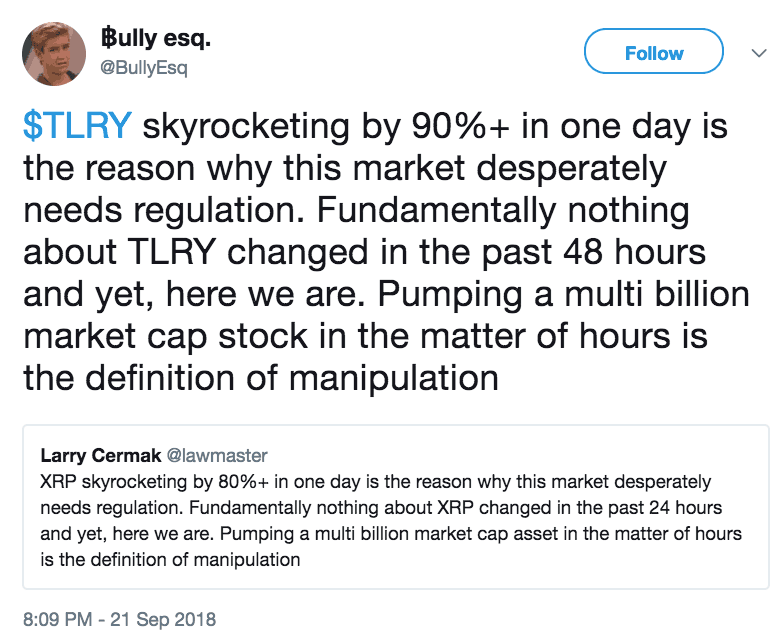 Cryptocurrency traders acknowledge that price manipulation does occur, yet there is an understanding that the whales who dominate the crypto space are not centralized in their decision making, meaning even those with vast amounts of Bitcoin are constantly in competition with others who have just as much Bitcoin and may want to influence the market in a different direction. This creates its kind of decentralized equilibrium that although not perfect, is at least in line with how a free market should function.

The same cannot be said for traditional financial markets, where power is concentrated in the hands of a much smaller pool of people, and regulators do not have sufficient checks and balances to ensure that the decisions they make are not without conflicts of interest. 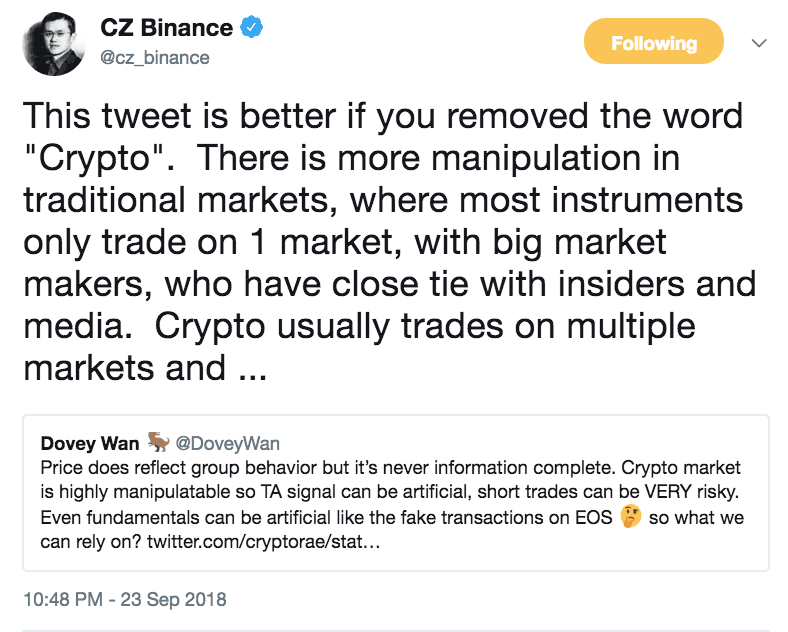 Easier to investigate the crypto markets

It is very likely that the enormous rallies in TLRY and XRP were driven by nothing more than retail investor sentiment and not price manipulation. However, if one were to launch a thorough investigation, it would be much easier to find manipulation in a market where all cryptocurrency movements are recorded on a decentralized and immutable ledger, versus one where big market movers operate through centralized organizations with highly limited transparency. There are of course some benefits to the way traditional financial markets regulate assets, such as by demanding company audits or halting trading when there is too much volatility (as was done 4 times with TLRY last week), but overall, manipulation in the traditional markets still occur, just in more covert and sophisticated ways compared to crypto.
Ultimately, it’s clear that neither market is perfect when it comes to preventing bad actors from committing fraud or market manipulation, which is why (despite the overwhelming influence of hype driven retail investors) we will always remain somewhat suspicious when assets like TLRY and XRP achieve 100% gains in a single week with no fundamental change to their company operations.

The post What TLRY and XRP Crazy Rallies Reveal About Financial Markets appeared first on CryptoPotato.