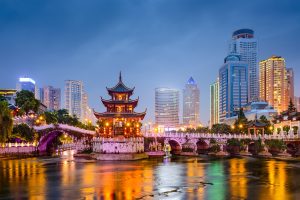 China is an emerging economic juggernaut.

China’s annual GDP growth rate was 6.5% last quarter. Technically, the growth rate is around 10%, but there’s 4% inflation. And China has maintained an even higher average growth rate over the past few decades.

Some people doubt these official numbers. But disposable income in China is also rising by around 6.6%, and I believe the numbers for the most part.

Chinese tech companies have gone global in a big way. They are increasingly presenting real challenges to American giants like Apple, Cisco, Qualcomm and Google.

Huawei is a prime example. The Chinese company makes phones, mobile processors and networking equipment. And it’s now handily beating Apple in China. In the last three months of 2018, Huawei sold 30 million smartphones in China, three times more than Apple. Growth in Europe is also strong, and Huawei expects to surpass Samsung as the world’s largest phone maker next year.

Huawei’s networking business has soared over recent years as well. And it’s in direct competition with Cisco and others to build new 5G cellular data networks.

The U.S. has been saying Huawei equipment is a security risk since at least 2012. Huawei’s CFO was arrested in Canada last December on a fraud charge at the request of the U.S. government. In 2014, the government banned Huawei from bidding on government contracts. And there’s a rumor that President Trump may ban Huawei hardware completely. Officials are actively trying to get allies to ban Huawei equipment abroad as well. They claim that China could be spying through Huawei equipment, but no proof has been offered so far.

The argument to ditch Huawei has been a tough sell, according to The Wall Street Journal, because customers really like using Huawei equipment. And they save a lot of money since Huawei offers products that are both cheaper and (arguably) more advanced than the competition.

I had a Huawei phone, the Google Nexus, before my current phone. It was a nice piece of hardware. But Huawei’s relationship with Google ended mysteriously in 2016.

In 2018, it looked like Huawei was set to sell phones through AT&T and Verizon. But the deals were canceled due to “political pressure,” according to CNET.

Huawei is not the only disruptive Chinese company making waves. Alibaba, Baidu and Tencent are all emerging powerhouses.

I believe the growth of these Chinese mega-tech companies is what’s fueling this trade war.

It’s not about tariffs or exchange rates. It’s about dominating the world economy.

Let’s face it, China is on the upswing right now. Sure, China has a lot of debt (like the U.S.). But it also has a strong growth record. China is already on track to surpass the U.S. in GDP in the near future. And its lead in future growth keeps growing.

Both countries have gone on a debt binge, especially over the last decade. So why is China growing so much faster?

China borrowed and spent trillions on infrastructure. Trains, roads, factories and new housing have been built up crazy fast.

We here in the U.S. have spent our money less wisely. We’ve neglected infrastructure and borrowed trillions to spend in seemingly endless wars.

I suspect this accounts for most of the difference in performance. China spent its money wisely and has been doing so for some time. It’s also using “soft diplomacy” to win allies and trade partners.

Of course, the U.S. still has its trump card: The dollar is the world’s reserve currency. This means we get to buy things from overseas cheaply and borrow money easily. But we cannot rely on that forever.

If we wish to compete with China long term, we need to get our house in order. And we really need to clean up the disaster that is Washington politics. It’s crippling our nation’s growth.

If we do ever fix our political system, I believe we could see similar or even better growth rates than China. America has unmatched entrepreneurial spirit, but too much of the economy has been directed into wasteful government efforts.

The sooner this conversation gets going across America, the sooner we can start working on solutions and cutting spending. It’s going to happen eventually. Personally, I’d prefer we do so before the market forces us to.

The post What’s the Trade War Really About? appeared first on Early Investing.