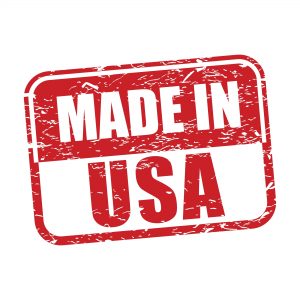 Knowing where something is made used to matter a lot to me – as an entrepreneur, investor and customer. These days, it still does, but it’s a little more complicated.

I remember getting ready to buy my first new car in the late 1980s. I liked Toyota, but its autos were made in U.S. factories and got middling reviews in Consumer Reports. Its station wagon, on the other hand, earned much higher marks. That’s because it was the only model made in Japan and shipped to the U.S. So that’s the car that transported me, my wife, two kids and one lovable boxer around for the next eight years.

Fast-forward about a decade, when I was exporting clients’ products, and my attitude toward products made in the U.S. had taken a 180-degree turn.

Then it got even more complicated.

I wanted to ship a cleaning product to Indonesia in bulk (55-gallon drums of the concentrated product), dilute and reconstitute the product using a couple of commonly available chemicals, and finally package for retail distribution in Indonesia.

I wanted a “Made in USA” label for the product and so did my Indonesian wholesalers. They knew it would increase demand. But we didn’t get it because the majority of its content was locally sourced. It didn’t seem to matter that Indonesia’s biggest contribution was its local water supply.

As you can see, where something is made or comes from made a big difference in the ‘80s, ‘90s and into the new century.

On the one hand, where something is made is more important than ever. With luxury goods, certain snobbish standards still persist, like shoes from Italy, gowns from Paris or watches from Switzerland. Then there’s the more conscious consumer concerns. If it’s food… Is it locally sourced (farm-to-table) or shipped from far away? Is it from an organic farm? Is it wild (caught off the coast of Norway) or farm raised (in unregulated Vietnam)? If it’s clothes… Does the factory follow fair labor standards? Does it use sustainable materials? Is it energy-efficient?

If you’re concerned that your food, clothes or other products come from unsavory or unregulated places, that’s your right. It’s called the power of the purse, and you have the right to exercise it.

Where something is made or raised is important not only to customers, in many cases, but also to producers and retailers. Take Walmart, for example. It’s developing a blockchain-based system tracking where all its leafy products come from.

Whether it’s denim or diamonds, more and more companies are demanding to know the origins of their products.

Then there’s the trend going in the opposite direction.

Thanks to cloud computing, companies from anywhere in the world can launch products and apps globally and have them accessed locally via open platforms such as Android and IOS. And where they come from doesn’t matter to users.

Take Musical.ly, the lip-syncing app. The company was founded in Shanghai. I doubt most Americans knew this or cared. They simply loved the app. Its U.S. success helped convince ByteDance – a well-known Chinese startup – to buy it. It’s now part of ByteDance’s global TikTok video-sharing app, which has been downloaded and installed nearly 80 million times in the U.S. and 795 million times globally (not including Android users in China).

Sometimes it’s hard to even determine a company’s origins. Take popular shopping app Club Factory. I googled where it comes from and came up with this…

While India is emphasized in the answer, the app originated in Hangzhou, China.

But, again, does it really matter? If an app strikes a popular chord or vastly improves user experience, no one cares where it comes from.

Both of these trends will stick around. Someday soon, I expect to be ordering a meal from my favorite locally owned Mexican restaurant that uses farm-to-table ingredients and delivers via Chinese-made drones run on a food delivery app originating in Europe. (The countries are, of course, interchangeable, or you can choose your own!)

The post When Product Origins Matter (and When Consumers Don’t Care) appeared first on Early Investing.

News Fix: WeWork Isn’t the Only One Cleaning Up Its IPO Mess