Crypto Blog
You are here: Home / Crypto Blog / Featured / Why the Bitcoin ‘Halving’ Will Change Everything

In six weeks the number of Bitcoins produced with each block will be reduced to 6.25. This reward halving has long been predicted to put upward pressure on the price. One analyst is demonstrating the significance of this move by comparing it to other limited commodities.

Analyst PlanB has tweeted a unique chart that looks at Bitcoin’s stock-to-flow ratio. This ratio is a metric that compares the available quantity with the production rate. It is often used with precious metals to predict production profitability. 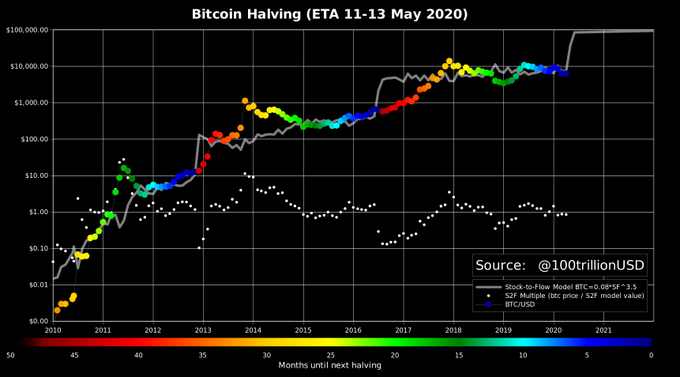 481 people are talking about this

This chart ties in with an article written by PlanB last year. The author notes that Bitcoin currently has a stock-to-flow ration of 25 (now 27). This means that at current production rates it would take 27 years to mine the present number in existence. However, the halving will cause this number to roughly double, as production is cut in half.

PlanB has demonstrated that over the past ten years a strikingly clear correlation exists between Bitcoin’s market price and its stock-to-flow ratio. He predicts that should this trend continue, the flagship cryptocurrency could soon have a market cap of USD $1 Trillion, or $55,000 per coin.

Bitcoin is the first scarce digital object the world has ever seen, it is scarce like silver & gold, and can be sent over the internet, radio, satellite etc . . . A statistically significant relationship between stock-to-flow and market value exists. The likelihood that the relationship between stock-to-flow and market value is caused by chance is close to zero.

DEVELOPMENT WILL CHANGE THE BLOCKCHAIN SPACE

The analysis put forward by PlanB is compelling. It reinforces arguments from other analysts that have predicted a big price spike due to the halving. Worth noting, however, is the fact that Bitcoin remains a work in progress. In order to continue to hold value it must continue to achieve mass adoption and fend off competition from rival alt coins.

Importantly, the Lightning Network has yet to…