Crypto Blog
You are here: Home / Crypto Blog / Bitcoin / Why These Cryptos Fail to Toe the Line 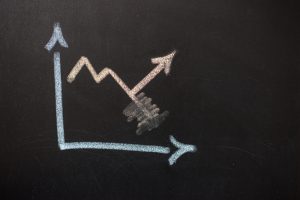 Most cryptos fell in January. All the big ones anyway. I’m talking about the top six (by market capitalization).

It’s called “China’s Ethereum” by some. Like its American cousin, it specializes in smart contracts.

NEO’s price follows its own path because its main applications will be in China, not the West. And the majority of investors are Asians, not Westerners.

As an investor in NEO, I must admit, it was nice to see.

And it wasn’t the only cryptocurrency to do so.

VeChain (VEN) is a top-20 altcoin. It shot up 146% in January. Like NEO, it’s another China-centric coin, developing blockchain solutions for Chinese companies.

The first week of February didn’t see a turnaround. As I write, bitcoin is already down another 20%… Ether is down 29%… and Litecoin is down 6% (but all three are now up!).

Like those in January, though, some coins have not fallen in line.

Tether, with a current ranking of 16 and a market cap of $2.2 billion, is holding its value so far this month.

So are a few other much smaller coins, like bitCNY. It has a cap of around $32 million.

BitCNY is a decentralized cryptocurrency based on the BitShares blockchain that is pegged to the Chinese yuan. The demand of bitCNY emanates from users who desire that the token get the same purchasing power as the yuan.

In a nutshell, bitCNY is a token that represents the amount of BitShares (BTS) equivalent to one yuan.

Market pegged assets are NOT leveraged to sudden price booms like many other digital coins. They simply follow the price of the asset they are pegged with.

Because bitCNY operates differently from other coins, it can go up while the vast majority of coins go down.

Russian startup Revain, on the other hand, is a more typical crypto. The company built an unbiased feedback platform where reviews cannot be changed or deleted. Revain hopes to stop the spread of fake news and ratings manipulation.

Apart from Revain, bitCNY and Tether, 16 other coins are up in the month of February. Here’s a list of the top 12 as I write… 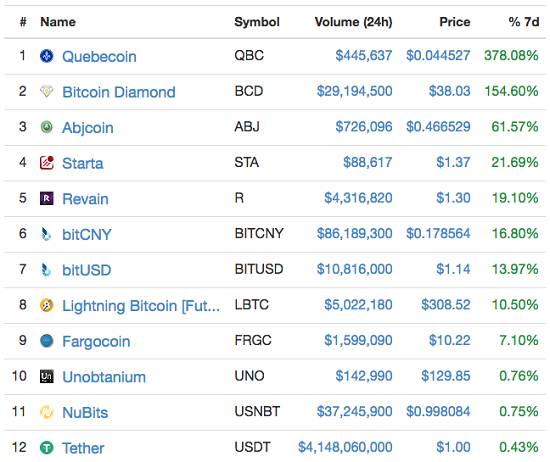 Two coins are up by triple digits and six by double digits.

But the only one that’s a top 20 coin by market cap is Tether (currently ranked No. 16).

Small caps can sometimes be manipulated. For example, bitcoin Diamond, the second-top-ranked coin, is extremely volatile, even for a cryptocurrency. Its volatility can be traced to suspected pump-and-dump schemes emanating from Asia.

Is that what’s happening with E-Coin (ECN)? Take a look at its seven-day chart… 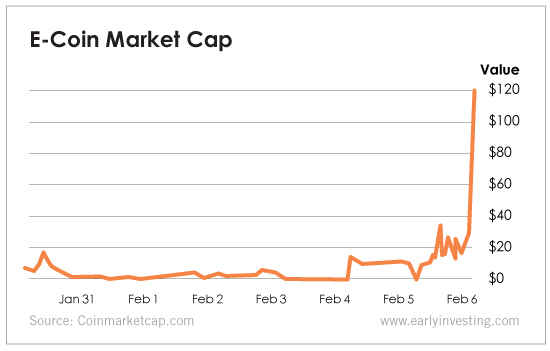 Its price hike seems to have come from transactions totaling less than $50,000 that occurred on CoinExchange in the last 24 hours.

E-Coin is a European exchange service that works with bitcoin, Litecoin and dollars. It seems to be on the up and up.

But until I know for sure what’s going on, I’m keeping my distance.

The variety of cryptos you can buy and sell is truly amazing. But recent market activity seems to be ignoring that, not quite treating them as an undifferentiated whole but also failing to take into full account the huge differences in technologies and prospects among the cryptocoins.

There are very few that manage to break free of a falling market and rise.

Today, I’m seeing this dynamic again. The market has turned up, and I count only seven coins out of the top 100 that have gone down in the last 24 hours.

When there is a shortage of concrete metrics to go by, investment sentiment plays a bigger role in boosting or withdrawing support.

That seems to be the case here…

At least for now.

The post Why These Cryptos Fail to Toe the Line appeared first on Early Investing.

News Fix: Who Watches the Watchers?

Korean Supreme Court to Judge Whether Crypto Regulations Are Unconstitution...

So Long, All-Time Highs? Goldman Sachs Says Crypto Peaks Have Been And Gone
Scroll to top