The crypto market remains volatile, with analysts actively trying to seek insight into its next moves. Litecoin now appears ready for a notable correction. Such a move could set off a similar drop in Bitcoin and other cryptos, as it has done before.

As crypto traders attempt to find patterns in the present market environment, many look to altcoins which have lower liquidity and tend to be traded by more experienced players. Analyst Benjamin Blunt asserts that Litecoin may soon see a price drop. In a recent tweet, he stated:

i like to use ltc as a guage for the broader crypto market as i find it usually has a clearer structure.

this rise the last few days feels like its been an abc up and now printing a lower high at the 0.618, cant help but feel atleast one more low down to 22-24 is on the cards 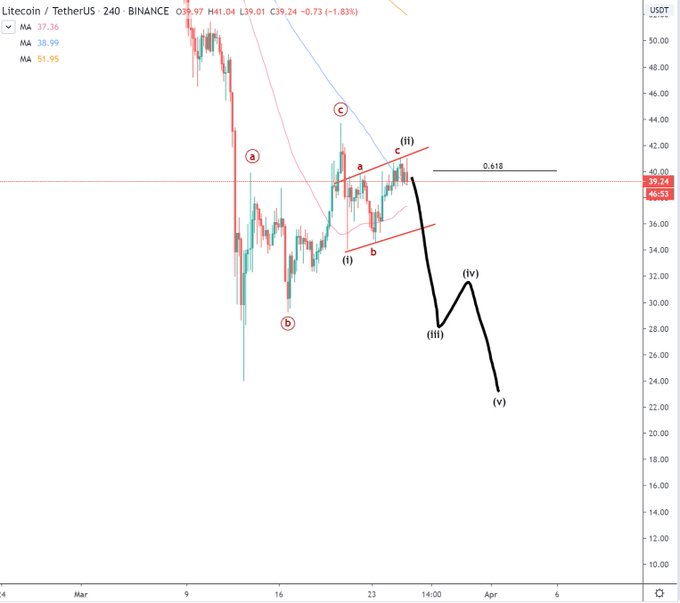 46 people are talking about this

Should Blunt’s prediction prove true, and Litecoin does tank to the low 20’s, Bitcoin may soon follow. Litecoin’s curious relationship with Bitcoin dates to the earliest days of crypto adoption, with market action between the two frequently working in tandem. In fact, Litecoin moves can often be used as predictors for Bitcoin.

As with the rest of the cryptocurrency market, Litecoin’s price has swung wildly over the past several days. It is down two percent over the past twenty-four hours. This decline is understandable, as profit takers are now selling to reap the rewards of yesterday’s big gains.

Much has been made of the uniform movement of all coins within the cryptocurrency market. Despite the tremendous differences between different platforms, they all seem to rise and fall together. Before the introduction of stablecoins, altcoins tended to move opposite of Bitcoin. More recently however, the market tends to move as one.

Litecoin critics have long claimed that its similarity to Bitcoin makes it unnecessary, and thus doomed to fail. Nevertheless, it has remained resilient, with a large group of dedicated advocates that have stood by the project even after founder Charlie Lee sold off his huge LTC stash. Longevity notwithstanding, Litecoin remains primarily a speculator coin used almost entirely for trading.

Altcoin advocates repeatedly assert that mass adoption of blockchain technology will lead some platforms to challenge Bitcoin for the top spot in the market rankings. However, Bitcoin remains by-far the most valuable and best-known blockchain asset, worth far more than all others combined. It has been almost three years since another coin presented a serious threat to this hegemony.

Following altcoin prices as a…

$2 Trillion for Surveillance Capitalism – US Government Promises $1,200 to... Investing: This Stock With Bitcoin Exposure Is Oversold Amid The Global Markets...
Scroll to top